Audiobook Review: In My Wildest Fantasies by Julianne MacLean 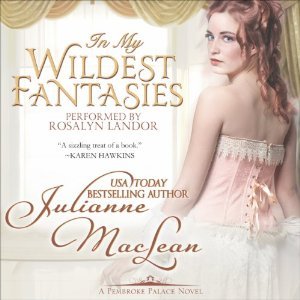 Title: In My Wildest Fantasies
(Pembroke Palace #1)
Genre:Historical Romance
Pages: Audiobook
Published: January 15th 2013
Where I Got It: My shelf (Audible)

Julianne MacLean's thrilling Pembroke Palace Series begins when a young and innocent aristocratic lady is rescued from a runaway coach by a heroic stranger on a horse-who appears like a phantom out of the mist in a fog-shrouded forest.
Lady Rebecca Newland cannot forget the captivating nobleman who saved her life, and she sets out to meet him again when she is of an age to be courted. Unbeknownst to her, her timing is impeccable, for Devon Sinclair, the future Duke of Pembroke, has just been informed by his mad father that he must take a wife before Christmas in order to thwart a family curse and preserve his inheritance.
Lady Rebecca is everything Devon could want in a wife - she is beautiful, charming, and she desires him openly. But can a marriage built on fantasy succeed, or will the lovers be forever entangled in the seductive web of their mutual passion for what occurs each night the marriage bed?

I had picked this up because I randomly read/listened to the short story. I wanted to check out more by the author in hopes maybe one of her full novels would be better.

The story follows Lady Rebecca and the future Duke Devon. The two had met years previous when Devon saved Rebecca from a getaway carriage. Years have passed and she still loved him. When her father picks out a terrible man to be her husband she decides she is going to throw a Hail Mary and try and marry her hero. Lucky for her Devon is needs of a wife to save his and his brothers' inheritance. Fancy that, eh ;) Bonus points it is insta-lust for both of them.

This a unique way to tell a common HR story. It was refreshing and I was curious how it was all going to end especially when Devon has zero interest in love because of something terrible that happened. Poor guy. I felt so bad.

Now...I didn't really the whole diary thing. It was different for sure to have Lady Rebecca have some knowledge on love and smexy stuff because of this random diary she found. It was nice to not have the heroine be super naive. But it felt like a young lady of the time wouldn't put THAT much descriptive detail in it and if someone did a proper young lady wouldn't keep reading. Maybe I'm looking too much into it.

Devon annoyed me. I wanted to like him a lot but he annoyed me. I felt bad for him yes. That terrible thing was indeed terrible, but I wanted to kick him especially when he gave Rebecca crap for having a motive to wanting to marry him. UMMMM jerkface...so did you. >_> Ugh.

There was insta-lust. Rebecca loved the idea of him but didn't love HIM. And I liked that. It worked and made sense. It took forever and day and I am happy.

Should I even say anything about the narration???? SHE IS ALWAYS AMAZING!!! Love her.

Overall, I did like this. Some issues, but still enjoyable. I am curious for book 2, but I'm not at the same time mainly because I'm not a fan of the next brother. He's even more of a jerkface then Devon. Anyways....I'll give this 3 stars.

The cover is so pretty.

between dreams and reality said...

Oh a bit too bad that it was not more

I think this isn’t for me. I would be bothered by all the things that annoyed you especially the male lead and the insta lust stuff. Ugh!

The narrator is new to me, one day!

Mel, I knowww. I had high hopes.

Heidi, yess it was rough

B, yess one day! She is fun