Audiobook Review: A Kiss Before the Wedding by Julianne MacLean 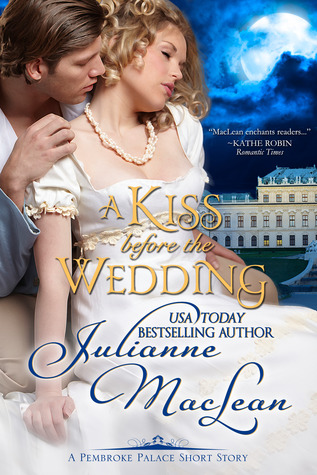 Title: A Kiss Before the Wedding
(Pembroke Palace #5)
Genre: Historical Romance, Short Story
Pages: Audiobook
Published:  November 30th 2012
Where I Got It: My shelf (Audible)

Lady Adelaide Robins, the charming and beautiful daughter of an impoverished earl, was raised on the foggy moors of Yorkshire. Never in her wildest dreams did she imagine she would travel to London, capture the heart of a duke, and receive a proposal of marriage. Is she ready for a life of luxury and privilege as a duchess? Or will her heart forever belong to another?

William Thomas, the second son of a Yorkshire viscount, is about to be disowned for his unbecoming ambitions to become a medical doctor. But what does it matter if he can have the woman he loves at his side? Determined to finally claim the hand of Lady Adelaide, his lifelong beloved, William is shocked to discover that she has accepted a marriage proposal from a duke. With the wedding only days away, will he be able to win back her heart?

But the story follows Adelaide and William. Adelaide and William had been childhood friends and she has always loved him. She thought he loved her too, but he went to Italy and its been a couple of years. No promises to come back or declaration of love. SO what is a gal to do? Well...hook a duke and get married. Weeks before the wedding, she write him a letter to explain herself and say goodbye. He gets this and realizes he loves her so he zips back to England for one last chance.

I knew this was going to make me mad, but I wanted to listen to it. I wanted to punch William. Jerkface. How dare you come back! You assumed she would just wait until you were ready to settle with no promises or anything. Heck...no letters for months. No declaration of love. GR. And Adelaide was a dummy. Marry the duke girl!

Even though this story annoyed me...it did make me curious to check out the others of the series. Strange I know. The writing was pretty good.

I also really adore the narrator. She is awesome.

Overall, short, sweet, and annoying. Daft girl and rude boy. I'll give this 2 stars. One for the writing and one for the narrator. I do want to read book 1 though. Maybe I won't hate the main characters in that one. LOL.

Eh it is his rom, who cares in which order you read it ;)

Yess so I did not care. But I am confused tho...lol