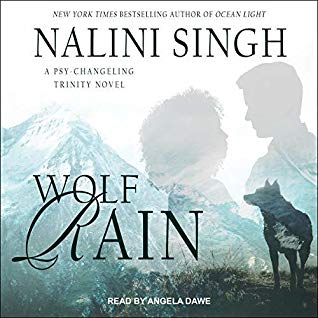 This one felt dark, but as always Singh does make it great in every way.

First we have Memory, a psy who has been kept prisoner most of her life. She thinks of herself as a victim, and one with dark horrible psy powers. But she is strong and a survivor.

Aleksei has demons of his ones. His brother went rogue, his dad went rogue, will he go rogue? And then he hears the cries of a psy and goes to investigate.

He challenges her, she pushes back. They are both what the other one needs. And they take their time, considering, and it feels so right.

Then there is the darkness, the serial killer who has kept her prisoner and wants her back.

Though there is another plot too, a hidden darkness in the psy world. And when the serial killer story ends there was still almost 2 hours left, which felt strange. The other issues was then resolved too. I guess they had to be there at once so it might expand into the next book or something.

The psynet is failing and I do wonder how the will fix it...which means...I can't wait for more!

Great book, as alays! singh does not disappoint

Narrator
I'd say Dawe's women have very throaty voices, very dark. Not all, but at least the main. But it fits. SHe has a great range and everyone feels distinct. Her female and male voices are great and she brings emotion and need into the story.

She is great to listen at and she brings the story to life. Now when I think of those books I missed, I'd say I would rather listen to those than read

The end of Silence was supposed to create a better world for future generations. But trust is broken, and the alliance between Psy, Changeling, and human is thin. The problems that led to Silence are back in full force. Because Silence fixed nothing, just hid the problems.
This time, the Psy have to find a real answer to their problems—if one exists. Or their race will soon go extinct in a cascade of violence. The answer begins with an empath who is attuned to monsters—and who is going to charm a wolf into loving her despite his own demons.

I don't think I knew about this one from the author