B's Monday Review: The Song of the Jade Lily by Kirsty Manning 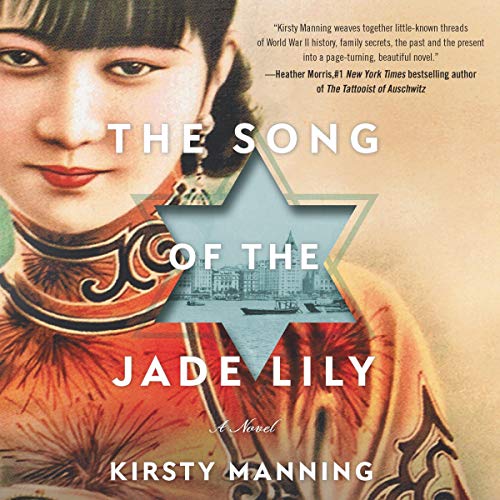 This one takes place during WWII and present time. With the grandmother and granddaughter. As always with dual timelines I did find one more interesting, and that was Romy's in -39. This one would have worked great as just that too, sure the other POV brought mystery, but still.

Romy and her parents leave for Shanghai in -39. And as always I googled things and the Chinese diplomat in Vienna did give Jews a chance the flee.

Shanghai is another world to them, and she loves it. Of course half is also under Japanese occupation. I did feel the book was lighter, not the right world, but later on they are all put in a ghetto. Evil things are told, but at the same time she fast forward the more troublesome years. Not that I want all darkness, this was not that kind of book.

Romy studied to become a doctor. She met Li, who became her best friend. She hoped her brother who was in Dachau would come to Shanghai (yes that was rather heartbreaking). I liked Romy.

Then in present day Alexandra looses her grandfather Wilhelm, and she takes a job in Shanghai. All she knows about her true origin is that Wilhelm and Romy adopted her mother from Shangai. So she investigates when Romy is closemouthed.

Ok so this was actually the weak point. The secret was not a secret at all. It was cruel of Romy to make it into a secret and not tell her daughter the truth. Because it was NOT a secret. Everyone would have been happier with it out in the open. Sigh, flimsy secrets.

So I can not say much about the child Romy adopts, the secret needs to unravel. Just, why it was a secret I do not know. Cruel, very cruel to keep it so.

There is heartache to be had in Shanghai, sadness, and hope for a better tomorrow. I enjoyed the story, and the end is rather bittersweet.

Narration
I have listened to Saskia before and I like her style. She manages well with accents and male and female voices. You easily fall into her narration.

1939: Two young girls meet in Shanghai, also known as the “Paris of the East”. Beautiful local Li and Jewish refugee Romy form a fierce friendship, but the deepening shadows of World War II fall over the women as they slip between the city's glamorous French Concession district and the teeming streets of the Shanghai Ghetto. Yet soon, the realities of war prove to be too much for these close friends as they are torn apart.
2016: Fleeing London with a broken heart, Alexandra returns to Australia to be with her grandparents, Romy and Wilhelm. Her grandfather is dying, and over the coming weeks, Romy and Wilhelm begin to reveal the family mysteries they have kept secret for more than half a century. As fragments of her mother's history finally become clear, Alexandra struggles with what she learns while more is also revealed about her grandmother's own past in Shanghai.
After Wilhelm dies, Alexandra flies to Shanghai, determined to trace her grandparents' past. Peeling back the layers of their hidden lives, she is forced to question what she knows about her family - and herself.

Email ThisBlogThis!Share to TwitterShare to FacebookShare to Pinterest
Labels: B's Mondays, Blodeuedd, kirsty manning, The song of the jade lily

I am curious about this one. I keep seeing it everywhere!

This sounds like one I'd enjoy. But, secrets and lies... sigh. Good to know b/c it will probably annoy me, too.

Carole
YOu are? I haven't seen it anywhere :/

Sophia
I thinks so too! But yes the secret was stupid.

Carole, again, omg I just checked bold type, it's like not on anywhere! Freeform, whaat? Sigh