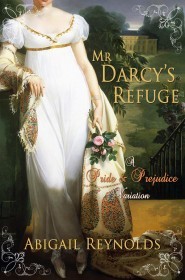 
I finally Dled the kindle app on my phone, cos hell, nope I do not ever read them when I dl on my computer and then I can not find them. Though this did take me 2 months, ooops. Note to self, if you start one then do finish too.

To read it this long was not a good idea. I totally forgot how they fell in love *hangs head in shame* But hey, still fun!

They have to interact during a flood. Darcy is quite the hero, and Lizzy has to agree.

They will fall in love, have to struggle for their love. Mr Bennet is quite the d*ck. Wickham is up to his old tricks, and omg Jane has quite the love story of her own and I applauded that at the end. Well done, well done!

variations that mix things up are always fun

Trapped for three days by a flood, and trapped forever by society because of it….
The river isn't the only thing overflowing in Hunsford when a natural disaster forces Elizabeth Bennet and Mr. Darcy to work together. The residents of flood-stricken Hunsford, seeking refuge in the parsonage atop the hill, are unaware they are interrupting Darcy's disastrous proposal. Even worse, the flood has washed out the only bride to Rosings Park, stranding Darcy with the woman who has just refused his offer of marriage. But it may already be too late to redeem Elizabeth’s reputation….

I enjoy her variations a lot. I don't think I've read this one. Yay for finding books now that you have the phone app. :)

Sophie,
Even if it took me a while ;) But yes the app was so handy. And with a bigger screen then it works