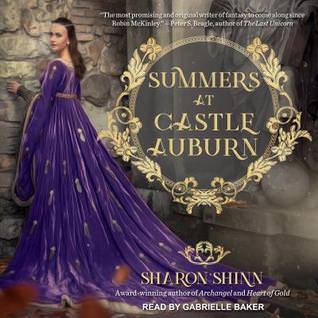 As a child, Coriel Halsing spent many glorious summers at Castle Auburn with her half-sister-and fell in love with a handsome prince who could never be hers. But now that she is a young woman, she begins to see the dark side of this magical place . . .

My thoughts:
When it started I was a bit weary, cos I honestly did not know what to expect. But soon I fell in love with this place thanks to the wonderful Gabrielle Baker. She really was Coriel, as a young girl and later.

Do a lot happen? Well, not exactly. It is not that kind of book. I also feel it is perfect for audio, it makes you happy to listen. And you can feel the woods around you and the magic.

We first meet Coriel on a hunting trip. The Magical creatures from Alora. Who then becomes slaves to those rich enough to afford them. Which is when you start thinking of it, truly horrible. These are kind "creatures", they bring warmth and happiness. to their masters. But they are slaves. And they kind of look like humans. So that is one thing that the book follow. Because Coriel loves her sister's slave, even if they do not think as it as a slave.

There is also a lot around court. The handsome prince whom everyone loves. Who loves to flirt with all the ladies and who only thinks of fun and games. The prince Coriel's half sister has been engaged to since her birth.

Then there is the prince's cousin, a nice young man, a bit more levelheaded. A young guardsman who is not afraid to banter and be a friend in need. Coriel's two besties who loves to gossip. Her Uncle who hunts the Alora, and of course her sister, who is sweet and kind. Oh and her grandma, the witch (which here are good, so yay for that.

She comes back at 17 again. Yes she was there previous years too, but now she starts to open her eyes. It is also a story about growing up, and seeing things in a new light. And for every year after 17 it gets harder and harder to return. Life as a woman is not the same as when she was a kid.

And through out the book, through the good and the bad, it continues to be enchanting. A rich tale with a wonderful heroine.

Conclusion:
I do recommend it, and it must be audio. There lies the magic.

Narrator Gabrielle Baker
Oh she was absolutely wonderful. Her voice was so familliar too, but no, I have not listened to her before. It really felt like listening to an old friend.
Written By Carole Rae at 6:00 PM

I do love a good audiobook... and you said this one was magical, so...

I also see that you are watching Parks & Rec! It's one of my favorite shows! My husband and I re-watch it all the time.

Audio perhaps but it does sound very YA...