Interview with David Ahern the author of Madam Tulip series

Today, we have a special guest on the blog! May we have a nice warm applause for David Ahern! He is the author of the Madam Tulip series! His new book to the series, Madam Tulip and the Bones of Chance, is out and available now on Amazon! 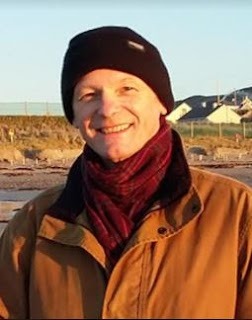 Besides for being an author, what are some are some hobbies or things you like? Do you like to dress up as a fortune-teller like Derry?

I play the double bass.  As Dorothy Sayers once said, that makes me 'a man permanently encumbered by luggage.' And also answers your second question. I can’t possibly cart around a vast costume bag as well.


What kinds of books do you read? Do you have a favorite genre or author?

I love comedy writers. Woodhouse, Thurber, our own Flann O’Brien, Terry Pratchett, Douglas Adams…  In other genres, I worship EF Benson (Mapp and Lucia) and Patrick O’Brien (Master and Commander).

Tell us more about Derry/Tulip.

She’s an actress and moonlights as a fortune teller. She’s a teeny bit psychic, but when it comes to solving mysteries that’s no help at all. But the thing about fortune telling for the wealthy is that where there’s both money and secrets, you’ve got trouble.

What inspired you to write this series?

I wanted to have some fun, having written a bunch of serious books and plays.

Which character in the series do you relate to the most and why?

Jacko! Derry’s reprobate father.  I may be heading that way.

How many more books do you plan on writing for the series?

As many as people want to read.


If you don’t mind my asking, what are you currently working on now?

Madam Tulip book #4! I even know what it’s called, but I’m not telling.

Suspense, mystery, action, a little romance and lots of laughs

A surprise role in a movie takes actress Derry O’Donnell to a romantic castle in the Scottish Highlands.  But romance soon turns to fear and suspicion.  Someone means to kill, and Derry, moonlighting as celebrity fortune-teller Madam Tulip, is snared in a net of greed, conspiracy and betrayal.

A millionaire banker, a film producer with a mysterious past, a gun-loving wife, a PA with her eyes on Hollywood, a handsome and charming estate manager—each has a secret to share and a request for Madam Tulip.
As  Derry and her friend Bruce race to prevent a murder, she learns to her dismay that the one future Tulip can’t predict is her own.

Madame Tulip is the third in a series of thrilling and hilarious Tulip adventures in which Derry O’Donnell, celebrity fortune-teller and reluctant amateur detective, plays the most exciting and perilous roles of her acting life, drinks borage tea, and fails to understand her parents.

thanks for the interesting interview

Thanks so much for interviewing with me!

Lol, I like that her powers are no help at all