Blodeuedd's Audiobook Review: Of Beast and Beauty by Stacey Jay 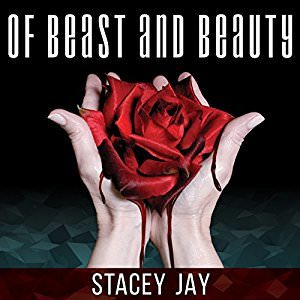 In the domed city of Yuan, the blind Princess Isra, a Smooth Skin, is raised to be a human sacrifice whose death will ensure her city’s vitality. In the desert outside Yuan, Gem, a mutant beast, fights to save his people, the Monstrous, from starvation. Neither dreams that together, they could return balance to both their worlds.

Isra wants to help the city’s Banished people, second-class citizens despised for possessing Monstrous traits. But after she enlists the aid of her prisoner, Gem, who has been captured while trying to steal Yuan’s enchanted roses, she begins to care for him, and to question everything she has been brought up to believe.

As secrets are revealed and Isra’s sight, which vanished during her childhood, returned, Isra will have to choose between duty to her people and the beast she has come to love.

My thoughts
I am going to try to make it short, I have  a cold and do not feel like writing a review.

I guess you can say that this was a fairytale re-telling, but at the same time it was not. There was no beauty, there was no beast.

Isra has spent her whole life locked in a tower. Her people live in a dome and monsters roam the wastelands. But just cos those outside look like monsters do not make them so. And now she is queen and all queens must die.

Gem is a monster who wants to save his people. He hates these perfect humans and he has every right too.

They meet under bloody circumstances. They become prisoner and jailer and we learn more about humans, monsters and life on this planet. Oh and it is sci.fi, but not much scifi around these days. The planet took its toll. Oh that makes me wonder why no one else came, maybe this was the last survivors of earth...

Anyway. She must marry this other dude, no it is not a triangle when she does not like him and he only thinks he can like her cos hey who wants a miserable marriage.

There are evil things going on.

Blah blah, oh I am tired. I can not write today.

So, anyway, it was a good one. Interesting story and I did not think it could end happily. It did have some plotholes at the end though, but eh, still worked

Narrator Julia Wheelan
I felt that she did really well with male and female voices. And especially Gem since he was a monster and did not speak like humans.
Written By Carole Rae at 6:00 PM