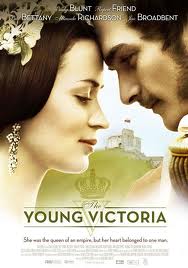 Length: 105 mins
Released: 2009 (Ireland)
Genre: Romance, Biography, Drama
Rating: PG, mild sensuality, some language, some violence, and smoking
Directed By: Jean-Marc Valle
Where I Got It: Borrowed it from Library

The Young Victoria is the true story about Queen Victoria of England in her younger years. The movie starts out with her coronation, then when it pans to her mother time lapses back to her childhood. Time moves on to when she first meets Prince Albert and follows her through her first few years as the Queen of England.

There are many well-known actors in this film. As the strong Queen Victoria is Emily Blunt (Jane Austen Book Club, The Wolfman, The Devil Wears Prada, Warrior Queen), as the irresistible Prince Albert is Rupert Friend (The Boy in the Stripped Pajamas, The Libertine), Paul Bettany (A Knight's Tale, A Beautiful Mind, Sharpe's Waterloo) as the clever Lord Melbourne, and Thomas Kretschmann (Valkyrie, King Kong, Wanted) as King Leopold.

Anyways, Blodeuedd had said she cried a bit while watching this and I took this warning and brought a box of tissue with me on the couch. Well, I was going to have to anyways, because I have a slight cold, but I'm glad she issued that warning because I did cry a little bit. It wasn't because it was a sad and tragic story, just some scenes pull at certain emotions that bring tears.

I really liked this movie. It was the first movie I've seen that was solely about Queen Victoria's youth. I've seen plenty of movies about her when she's old and near the end of her rule. I love how Jean-Marc Vallee put the film together. I loved the costumes and the scenery. Everything just went well together. The acting was superb! I believe that Emily Blunt should have won the Golden Globe for her performance, but alas, she didn't. Rupert Friend should have AT LEAST been nominated and won.

The only negative thing I could think of is the ending of the film. I believe they should have covered a couple more years of her reign; I think that the movie ended on an odd note. I feel that is was a little anti-climatic, you know? I don't know how to describe it, but it just...ended. Personally, they should have covered the birth of their first born or something like that.

Overall, I highly enjoyed this movie! I think Emily Blunt and Rupert Friend did a wonderful job and had great chemistry. If you have any love of history or just a good movie, watch this. You'll enjoy it. ^.^ Out of five stars I give this one 4 stars, because the ending was a little...anti-climatic, I guess is what it was. It is technically 4.4, but I don't give decimals.

It did end a bit...well maybe they just had more tension later on so this was for the be

Maybe. I would love to see a sequel.

I have the movie on my netflix queue. I think I'll have to bump it to the top of my list!

Hope you had a nice weekend.

^.^ I hope you let me know how you liked it when you watch it!