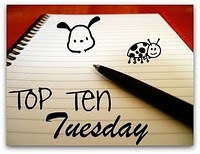 ~Top Ten Tuesday is an original feature/weekly meme created at The Broke and the Bookish.~
This week is a free-for-all day, which means I can pick ANY topic I want to. It took a while to choose. I've glanced at other people's ideas and I've finally decided upon one....characters that I can highly relate too. Some of them I call my book twin or the character I would be if I was sucked into that book. I got the idea from my last review of 'My Dangerous Duke' by Gaelen Foley. Enjoy! (there is no order in my list, I just list them as I remember them)
1) Kate Masden/Fox from 'My Dangerous Duke' by Gaelen Foley. She's a big nerd and she lives a slightly sheltered life. I really understand her.
2) Letty from 'The Deception of the Emerald Ring' by Lauren Willig. She is my twin, if I were to have a twin. She says things I would say and we kind of, sort of have similar looks. Well, just the freckles and being short.
3) Elinor from 'Sense and Sensibility' by Jane Austen. Even though I utterly hated the book, I still found myself loving Elinor because she reminds me of me. She hides her emotions like I do, but she cares deeply but its more "convenient" to keep her feelings to herself. Plus she's super smart and can save money like me. ^.^
4)  Celia from 'Castle of the Wolf' by Sandra Schwab. She's a book lover and a fairy-tale lover. She represents the daydreamer version of me.
5) Fools Crow/White Man's Dog from 'Fools Crow' by James Welch. Even though he's a guy, I can really relate to him. He use to be everyone's fool and I use to be like that. If I was to be a guy I would probably be like him and look like him.
6) Merry from the Lord of the Rings trilogy. Another male character, but hey we share a lot of similar characteristics. We may be serious a lot and smart, but we both know how to still be childish! Plus we're both short...haha.
7) Lizzie from 'Devil Takes a Bride' by Gaelen Foley. Another nerdy/bluestocking type character for me. We are both stubborn and smart, but we tend to fall for the bad boys. Sad for us, because the majority of the time they break your heart. Her common sense wasn't the best, but hey, neither is mine.
8) Ada from 'Cold Mountain' by Charles Frazier. She's shy, smart, bookish, but she warms up (slowly) to be more confident and open. She blooms into a girl who can stand up for herself. She's a little more emotional then me, but I found a lot of similarities with her.
9) Cannie from 'Good in Bed' by Jennifer Weiner. I feel like I could be best friends/sisters with this girl. She's like me in so many ways and I wish I could be like her in other ways. She's such a good person, but things tend to not go her way.
10) Charlotte from 'The Temptation of the Night Jasmine' by Lauren Willig. Another example of the daydreamer in me. She has her head so buried inside a book that it takes a special man to see her beauty. She tends to be over looked a lot by the opposite sex who prefer to look at the more charming and shiny people who are her friends. She's very shy and bookish. I highly relate to her. We look nothing a like though.
Which characters from books can be called your twin? Who would you be if you were sucked into a book?
====================
<3CaroleRae

Merry was such good comic relief in LOTR.

Ooh! Ada from Cold Mountain is a good choice!

How are you liking Revolution? I read it earlier this summer and got really into it.

Dead Trees and Silver Screens, yeah he and Pippin defiantly were. I like to think myself as the comic relief in life. haha

TheJennaGirl, thanks! I'm liking it so far. It took a little to get into, but I'm really enjoying it! Ooh! I will have to check out your giveaways. Giveaways are fun!

Most are new to me so I can't really say, but my twin...oh tricky! I do not really know