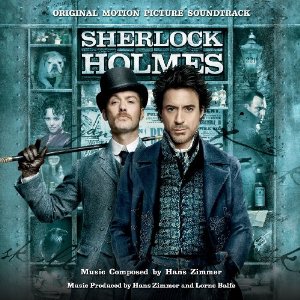 Sherlock Homles (2009) is a remake of the old adventures of Sherlock Holmes and his "side-kick" Watson. This version is a little darker then the old version. It has a more Gothic feeling to it and Watson and Holmes seem to be more partners in this version. They have equal (ish) screen time. The movie starts out with Holmes and Watson running the streets to find and save this young girl from being sacrificed at a Black Magic shindig. The movie follows Holmes and Watson trying to uncover a plot to destroy England and take over the world. Oh no! Can the witty dynamic duo save England from Black Magic?
This film is star-studded, which is one reason why I picked up this movie from the Movie Store. The always charming Robert Downey Jr (Iron Man, Zodiac, Richard III) plays the witty Sherlock Holmes, Jude Law (Cold Mountain, Enemy at the Gates, Repo Men) as the clever Dr. Watson, Rachael McAdams (The Notebook, Mean Girls) as the sneaky Irene Adler, Mark Strong (Tristan & Isolde, Oliver Twist) as the eeeeeviiiil Lord Blackwood, and Eddie Marsan (Hancock, V for Vendetta) as the cheeky Inspector Lestrade.
Like earlier stated this was a darker and more Gothic version of the lovable Sherlock Holmes. I was worried I wouldn't like this version, but I tried to keep an open mind. I kept myself from comparing and contrasting the two very different versions. In doing this I kept from being bias and I actually found myself liking this. I even like how Watson and Holmes had to stand up against "Black Magic" which *SPOILER* in it just turned out to be tricks and science, which I guessed to be the case. *SPOILER END*.
I also really liked how they made Watson and Holmes more equal. They are both smart and had about the same screen time. They didn't have Watson be just the "side-kick" who only had a couple smart moments. Holmes, however, was still a wee bit more clever in some aspects. They also were more friend-like then in the older versions, where Watson was just along for the ride. Along with this, I really liked the casting and the writing. The dialogue seemed a little off at the beginning, but once the story warmed up the dialogue warmed up too. This film was filled with wit and dry-humor. If dry-humor isn't your cup of tea avoid this movie.
There were a couple of things I didn't like. One, I pretty much guessed the ending and for me it was a little predictable. It is a talent of mine, so it isn't the movie's fault. Two, sometimes the story seemed to dry-up a lot and I found myself bored and I could have taken a nap. However, the story would pick back up.
All-in-all, it's nothing like the original Sherlock Holmes, but it's a good movie in it's own right. Before watching this, I do advice to watch this as if you've never watched the original, try not to compare and contrast. Out of five stars, I grant this one 4 stars. ^.^
Favorite Character(s): Watson and Holmes
Not-so Favorite Character(s): Irene Adler and Lord Blackwood

eh, for some reason it never worked for me :( I just do not know what it was that made it so

Yeah, it's definatley not for everyone. My mom wasn't a huge fan and neither was my dad. It was just an okay movie. I had to give it at least 4 because I love Jude Law and Robert Downey Jr. =D