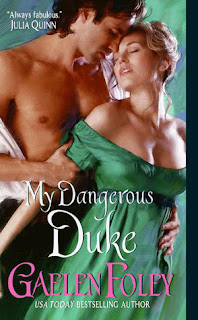 "The Inferno Club: In public, this scandalous society of London aristocrats is notorious for pursuing all manner of debauchery. But in private, they are warriors who would do anything to protect king and country . . .
They say that the very name of Warrington is cursed . . .
From a time as old as the cold stone of the duke's ancestral castle, the Warrington men have been plagued by tragedy. But Rohan Kilburn, the Duke of Warrington, has vowed to escape the predestined torment by forsaking love and devoting his life to the Inferno Club and its secret mission.
And then she is brought to him unbidden by cutthroats hoping to calm the duke's infamous temper—a sacrificial virgin of sorts. But even overpowered, Kate Madsen will be no man's sacrifice. And the duke's price for claiming her may be what he has sworn never to give—the heart he has so long and fiercely guarded—to the beautiful hostage he was never meant to love."
This is the second installment in Gaelen Foley's Inferno Club series. You could read this as a stand alone novel, but you might be slightly confused in certain areas, so I my advice would be to read the first one first. As you may or may not know I love Gaelen Foley's books. I can't get enough. Her writing style flows so well that even the boring parts are addicting. When I read her books I can't help but keep wanting more. Not only are these books filled with romance, but there is action, social issues, adventure, intrigue, and....spies! I love me some spies.
I really liked this one. I liked it more than the first, because the characters were more realistic than the couple in 'My Wicked Marquess'. The characters had real human flaws and strengths, well, except for Rohan because he was the "best" killer out of the trio. I can't decide if that's a flaw or strength. Hmm. Anyways, I really liked Rohan and Kate. Kate and me share a lot of similarities. I could really connect with Kate in a lot aspects. I feel like if I was to be any character in Gaelen Foley's book it would be either her or Lizzie Carlisle from 'Devil Takes a Bride'.


The plot was pretty interesting too, because how they met was kind of odd...but in a good way! The locals kidnapped her and gave her to Rohan as a gift. I couldn't help but giggle, because it was funny in an odd way. The story had a couple dry spots, but the dry spots held a lot of importance to future events. Gaelen Foley has left me speechless again with a wonderful novel. The only thing I didn't like about the book was the ending. It was too cliff-hangerish for my liking. Yet again no one knows where Drake is and what side he's on. I don't know, I just want Drake to return to his old self. Well, I can't wait to read the third book, so I guess that was the purpose for how the book ended to get you to read the next one.


All-in-all I loved this book. The characters and the plot were great. Gaelen Foley did a wonderful job with this one. Out of five stars I grant this one 5 stars, even though the ending made me mad. ^.^

Ohhhhh a sparkly 5 :D I like that. There are so many HR books out there that I want