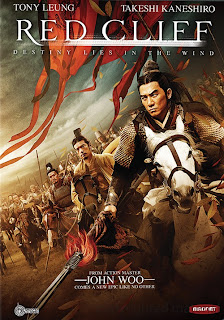 ~*My brain was fried from studying, so I wanted to sleep, but this movie was calling my name, so I got up and watched it. Haha, again I will not be slave to Exam Week!*~

Red Cliff is set in Ancient China (208-209 AD) and is based on the Battle of Red Cliff. This occurs during the end of the Han Dynasty. Chancellor Cao Cao has been given permission to eliminate the "rebels", but in all reality he wants to remove the last two major forces that stand in his way for his own ambitions: Sun Quan and Liu Bei. Liu Bei knows that Cao Cao will succeed in his ambitious plans if Liu Bei and Sun Quan do not join forces to stop him, so he sends his best battle stragestic and diplomat, Zhuge Liang, to convince Sun Quan of an alliance. Sun Quan agrees, so the battle for life as they know is on.

There are a couple of names and faces I recognized, so I was excited to watch this. John Woo is the director/producer of this, he also helped in the making of Face/Off, Windtalkers, and many others. Tony Leung (Hero) played Zhou Yu, Chang Chen (Crouching Tiger, Hidden Dragon) as Sun Quan, Shido Nakamura (Letters From Iwo Jima) as Gan Xing, Takeshi Kaneshiro (House of Flying Daggers, The Warlords) as Zhuge Liange, and Zhao Wei (Mulan) as Sun Shangxiang.

Well, where to begin?

I was enchanted with this movie! I can always tell when John Woo has anything to do with a movie. He has a certain magic in his directing or producing. It's hard to describe, but it's there. My first John Woo movie was "Windtalkers" and even though they used the female side of the language in that film, I still liked it. Yet again, I fell in love with one of his movies. The way he put the movie together was seamless! Even though I have the cut up American version, I loved it!

I'm a little angry that the American version squished both Part I and Part II together into one film. Yes, so there is no sequel. When I found this out, I was absolutely devastated!  Someday I might try and get my hands on the Asian versions. Someday. I doubt that they'll have English subtitles though. Perhaps it will, I purchased a completely Asian movie and it had English subtitles (Mulan), so there is still hope. Or I could learn Chinese. Whichever is easier.

Anyways, I loved learning about Ancient China. I learned a little about Ancient China and all the different dynasties in my Humanities class. However, we didn't get into too much depth. This movie shows a different world and you don't feel alienated, somehow it sucks you into their culture and helps you understand. I was confused at a couple points about what was going on, but thats bound to happen if you never heard of any of those people (which is me). The dialog was easy to follow, so that's not an issue. Even though you can watch the dubbed version, I couldn't without laughing, so I changed the audio to Chinese and read the subtitles. That was personally easier for me to do. Also, I loved how they added the element of nature and music to the theme of the movie. It wasn't just a war movie, it had deep meaning and it focused on the true love between Zhou Yu and his wife Xiao Qiao (played by Lin Chi-ling).

There was a couple things I didn't like though... For example, I found some parts to be kind of cheesy, like the ending. I chuckled and roll my eyes. Personally, I would've picked a different ending, but I do understand the symbolics behind it. I really do, but it was still VERY cheesy. Also, AGAIN my favorite character dies. SPOILER: Gen Xiang dies in the big battle at the end and sacrifices himself,  which didn't happen in real life. SPOILER END  What the heck? I think people are seriously out to get me. When that occurred I was very upset and was bitter. Maybe that's why I didn't really like the ending...who knows. I was especially mad when I found out that in real life he didn't die until years after Battle of Red Cliff. Come on John Woo! In my mind he lived, but maybe he was injured or something so they didn't show him. That's about it; there's nothing else I can really complain about.

Overall, I really loved this movie. I know I'll be watching it a few more times! There's magic in it, I swear. If you have a love of movies, you should check this out. You should especially check it out if you love history, like me! Out of fives stars this one will receive the full 5 stars! Yayy! ^.^ 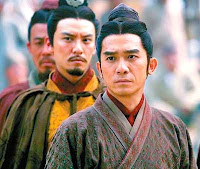 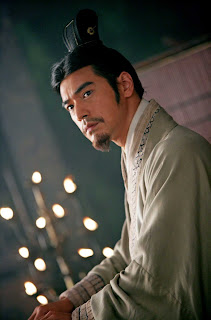 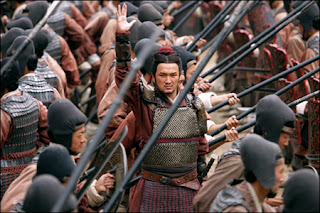 Fantastic blog! Do you have any tips for aspiring writers?
I'm planning to start my own blog soon but I'm a little lost on everything.
Would you recommend starting with a free platform like Wordpress or go for a paid
option? There are so many options out there that I'm totally
overwhelmed .. Any recommendations? Thanks a lot!


Here is my blog :: billig a kasse