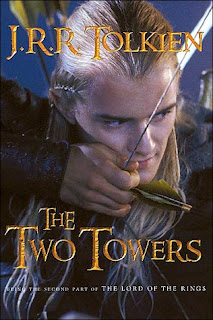 Author: JRR Tolkien
Title: Lord of the Rings: The Two Towers (2nd in series)
Genre: Fantasy, Adventure, Drama
Pages: 322
First Published: 1954
Where I Got It: My Shelf (box set)


"The Fellowship was scattered. Some were bracing hopelessly for war against the ancient evil of Sauron. Some were contending with the treachery of the wizard Saruman. Only Frodo and Sam were left to take the accursed Ring of Power to be destroyed in Mordor - the dark Kingdom where Sauron was supreme. Their guide was Gollum, deceitful and lust-filled, slave to the corruption of the Ring."


This is probably the millionth time I've read this and I pretty much know the story in and out, but while reading I'm still hanging on each and every word that JRR Tolkien wrote. The way that Mr. Tolkien writes makes it feel like you're reading it for the first time all over again. That's why I can continuously re-read  this trilogy and never bore of it. However, it's been a few years since I actually read this. The last time I read it was when I was 16 years-young, I guess.

This is my favorite movie, but my least favorite of the trilogy. You would think it would be my favorite, because it introduces a couple of my favorite characters and it introduces Rohan, but it's not. I don't really like  quickly things occurred and I feel like some of the chapters should have been saved for the next book or put at the ending in the first book. That's just my personal opinion. Also, there isn't a lot of songs or poetry like in the first and last book. Sometimes I felt that JRR Tolkien just threw this together as a last thought. I don't know, but I just felt like that at certain parts when I was reading.

Other than that, I have no complaints! I really love all the books for different reasons. I love how JRR Tolkien  strongly incorporates that idea of nature into the books, especially in The Two Towers. He gives nature a voice in Middle Earth and place. It's not just a setting or props, it's a character. The Ents embody that and literally give nature a voice (instead of figuratively). Since I'm sort of a big nature protector/lover, I highly appreciate this.

Also, I'm always astounded about the depth that JRR Tolkien goes into with each nation. Every area on the map of Middle Earth seems real! I feel like this really happened and all these places really existed. There's so much history and back-story, that when I start reading I feel like I'm reading a documentary. However, it's not boring, it keeps you entertained fascinated!

All-in-all, I still love this book. It's been a couple of years since I've read this, but I find my love for this book hasn't diminished or weakened. The Two Towers may not be my favorite out of the series, but I still love it. Out of five stars, I'm giving this one 4 stars. It would be 4.4 stars, but I don't give decimals. I recommend that everyone who loves to read should read this trilogy or attempt at it.  ^.^

Awww great books indeed. Awesome movies (the nature, all about the nature)