For this week I've drawn the clubs card, which means I must present something historical! Let's see....I found an interesting article about Venice. Since Lord of the Night by Susan Wiggs is set in Venice, I find this article very appropriate. You can find it here.

"Venice was founded in the fifth century and became one of the richest and most powerful cities in medieval Europe. Its wealth was based on trade with the Orient, and benefited from the city's geopolitical location, as Venice's mighty fleets brought silks, spices, exotic and luxury goods imported from the Near and Far East to Italy and the rest of Europe.

Venice maintained this important role as the intermediary between East and West for several centuries, but its dominance gradually began to wane as from the end of the fifteenth century. The new trading importance of the Atlantic, the result of Vasco da Gama's discovery of the sea route to India in 1497-98, the gradual loss of Venice's possessions and the economic and financial rise of other European powers wrested the previous maritime supremacy and trading monopoly away from the republic.

By Guardi's time - the eighteenth century - Venice was living on the memory of its past glory. The unparalleled charms of the city, whose cultural and intellectual life was stimulated by famous festivals, attracted countless foreign visitors, especially the English.

There was a party atmosphere all year long, especially during Carnival - a period that then lasted for a full six months. In addition, there were religious feast days, regattas on the Grand Canal and official ceremonies. The most splendid of all Venice's many celebrations came on Ascension Day and commemorated the "marriage between Venice and the sea". The Doge and the republic's leading dignitaries sailed out in the "Bucintoro" and cast the symbolic wedding ring into the waters.

In 1797, the city that had ruled the waves and maintained its independence for centuries succumbed to Napoleon's (1769-1821) invading forces. Having lost its autonomy and seen the last Doge deposed Venice was, by political agreements, incorporated into the Austrian Empire."
This is a quick summary of the history of Venice. I don't know much about Venice or Italy at all, so I found this very enlightening. Lord of the Night is the second book I've ever read set in Venice, so it's still sort of a new experience for me. The first book I've read set in Venice was The Thief Lord Cornelia Funk, it was a kid book so I found that I didn't learn much about Venice or Italy. Here's some pictures of the glorious city of Venice: 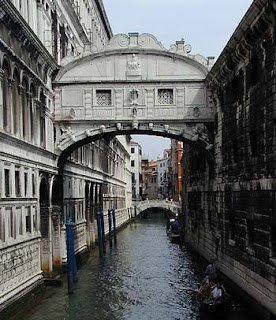