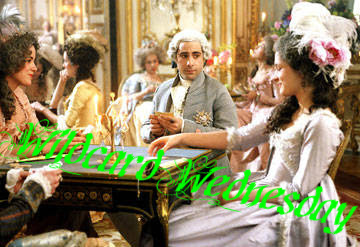 Haha! Exams won't keep me down! I'm pretty tired of studying for my General Psychology exam (which is tomorrow at noon), so I sneaked past King Leopold the Wise like a ninja in the night to this computer to post this post for today. I was going to skip this week's posting, but....I couldn't. ^.^  This week I drew the....ace of diamonds!!!! Which means I must discuss a past book I've read or a book I want to read in the future! Mmmm. I guess I can give you a little spoiler for an upcoming book.

Oddly enough I just got a call from my library that a book that I ordered has come in for me. I'm really excited about this one! It's: The Tokaido Road by Lucia St.Clair Robson. It's set in 1702 in Japan. I'm not 100% sure what the story is about, but I do know that it's about this lady who is out for revenge for the death of her father. Here's a little snippet from Lucia St. Clair Robson's book:

"With her legs folded demurely under her and the toes of one white-clad foot overlapping the other, Cat sat back on her ankles.  The cool, tight weave of the thicktatami mat gave slightly under the pressure of her toes and knees.  Cat leaned forward almost imperceptibly to study her guest.

At first she had thought, with relief, that he had passed out from drinking too much of Old Jug Face's watered sake.  That would have been fortuitous.  He was one of those guests in whom unconsciousness was the most desirable trait.
Cat had planned to leave him there, but that was when she had assumed he would waken the next morning with nausea writhing like a tangle of squid in his stomach and the rueful realization that he would have to pay a great deal for the privilege of feeling so bad.
The heavy robe of wadded yellow cotton was bunched up under him, revealing bowed, hairy legs sprawled carelessly.  Saliva oozed in a froth from his half-opened lips and dangled in a thin rope from his chin.  His wiry black topknot was askew.  His eyes were open.
Cat laid two pale, slender fingers on his neck.  Nothing.  Not a flutter of a heartbeat.  The customer had left his homely body, never to return.  The next occupants would be small, white, and legless.  Already a hardy fly, an emigre from the privy, was circling solicitously.
Cat felt panic rising from the seat of her soul, behind her navel.  She drew several deep breaths.  She needed to be calm.  She needed to think.
Soon the watchman would strike midnight, the hour of the Rat, on his wooden clappers.  At midnight Centipede would close the small door in the Great Gate.  He would lock the corpse into the pleasure district and into Cat's company until cock's crow.
Cat was sure the guest had been murdered.  The murder weapon, or what was left of it, lay on the lacquered tray that also served as a table.  The blowfish had been cleaned carelessly for a deadly purpose.
Only a single slice of fugu, blowfish, remained.  It was paper thin and transparent enough for Cat to see the deep blue waves painted on the porcelain platter under it.  Unless cleaned correctly, a speck of the poison in the fish's liver could kill a person.
As the numbness spread through his body, the guest had been able to think clearly, but unable to talk.  He probably had known he was dying when he'd lost control of his arms and legs and then his lungs and sphincter.
With a chopstick Cat poked the last slice of fugu.  Not often did death arrive in such a lovely package.  The filmy slices of pale flesh had been artistically arranged in the form of a flying crane.  It was the sort of ironic gesture that Lord Kira would make.  The crane was the symbol of longevity.  Cat knew the fish had been meant for her.
Kira, Cat thought.  He won't be content until he's killed me."


Just to get a taste of the world I'll be visiting in the future, here are some pictures I collected from Google: 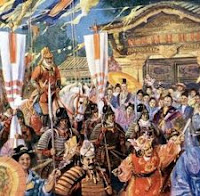 I can't wait! I'll be reading this by next at the latest, I'm nearly done with Our Hearts Fell to the Ground. =)

Thank you for the auspicious writeup. It actually used to be a enjoyment
account it. Look complicated to more introduced agreeable from you!
By the way, how can we communicate?

Marvelous, what a web site it is! This weblog provides helpful information to us,
keep it up.

I have often heard many happy stories of purchases made that way.

D'Addario is really a pretty high quality in making strings for the selection of instruments,
and they also are mostly recognized for their unique method of that they wind their strings together to
create them supposedly go longer. Overall, I much
like the Huntington guitar when it comes to quality of sound; it is going to be
ideal for beginners in the beginning stages. Just before
you decide to plunge straightaway in to the world of guitar playing, this is one beneficial words of advice that
learner guitar players should consider.

Ηello, I enjoy reading through your article.
I ԝanted to write ɑ little comment to support you.