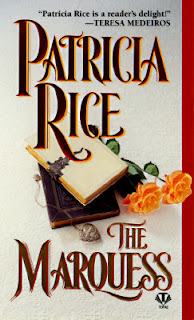 
"When Dillian Whitnell sought refuge at Arimnede Manor, she never dreamed the price would be her virtue. But someone had already made an attempt on her cousin's life, and Dillian was determined to prevent another. Even if it meant giving herself to Gavin Lawrence, the new Marquess of Arinmede, a seductive, darkly brooding man who made Dillian tremble between dread and desire....

Scarred in a duel over a feckless woman, Gavin left America and set sail for England, vowing never to give his heart again. But a surprise awaited him at his crumbling manor house-an exquisite young woman in terrible danger. It was temptation no man could resist, yet once Gavin tasted the searing heat of Dillian's passion, he knew he was lost and would risk everything for a second, glorious chance at happiness...."

This one may sound like a typical romance novel, but there's way more to it. There's a lot of intrigue, murder, complex situations, and complex relationships. Also all the characters seem like real people. Patricia Rice forces you to believe that all these characters really existed. I love being sucked into a world. Better showed then told I've always been told, and Patricia Rice does good by that.
I hate simple stories like boy-meets-girl-boy-loses-girl-he-fights-for-her-all-ends-happily-ever-after and stories such as those. This novel reminded me a lot of 'Castle of the Wolf' by Sandra Schwab, because there is a serious Beauty-and-the-Beast feel to it. Gavin was scared horribly in a duel and a beautiful, smart girl doesn't fear him and in the ends falls for him. I love that aspect of the book, because it made their love seem real. However, they just tried to cover it up and just call it 'lust', which you can obviously see through throughout the entire book.
I loved how it took forever for Gavin and Dillan to realize that they actually cared for each other. It all seemed very realistic. However, I did roll my eyes at some parts because they seemed melodramatic and I just wanted to strangle someone (mostly Gavin or Dillan). Some of the dialogue was a little annoying, but I enjoyed all the wit being tossed around.
Besides for some of the parts, there's nothing else I can really complain about. I couldn't put this book down! It was a cute book, but it really made you think. Too be honest, I had no clue how it was going to end and I thought I had the bad guy figured out, but I was wrong. I was a little shocked by the ending! I was a little upset at myself, because I was wrong. However, I give a bow to Patricia Rice for keeping me on the edge of my seat the whole book through. She bested me.
I'm not sure what else to say, except that I really enjoyed this book and I plan to re-read it in the future! It's a cute book to read during lazy summer days. I grant this book five stars. ^.^ I recommend this book to those that like historical romance novels or just a cute book to pass by the time with. I plan to check out more of Patricia Rice's books in the future.

I do have a book by her on my shelf :D And after this review I want to see if my book is just as good