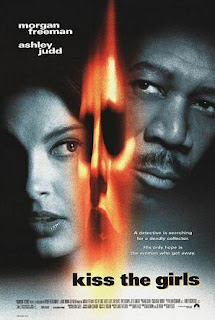 ~Just so you know, this review was suppose to be posted yesterday night, but for some reason Blogger.com wasn't working. I'm glad everything is working again! Enjoy~


Length: 115 mins
Released: 1997 (USA)
Genre: Mystery, Crime, Drama
Rating: R-rated, terror, violence, language
Directed By: Gary Fleder
Where I Got It: My Shelf (Mom and Daddy gave it to me as a gift)


'Kiss the Girls' was based off the novel written by the famous James Patterson. I'll definitely have to check out that book series in the future. The movie follows the forensic psychologist, Alex Cross (Morgan Freeman) and intern surgeon/doctor Kate (Ashley Judd). The story takes place in North Carolina (where Megan is going next week for a few days). Alex Cross heads out there after his niece, Naomi, is missing. While he's looking for anything that will help find Naomi, he's dragged into this case of a serial kidnapper and killer, whose been not only taking girls on the east coast but also on the west coast, when they find the body of this girl named Megan (scary). Megan had been a victim of this killer/kidnapper. The man is called Casanova and his next victim will be Kate.

This movie is a psychological thriller and my expectation of the movie was not a let-down. I loved this movie years ago and I still love it after all this time. I tried to watch it as if I never seen it before, so I watched it was my friend Meganie. It freaked her out a little bit! It also freaked me out too, because not only was one the victims named Megan, but another victim was named Carol(e)! I had forgotten that part.

I loved how well they did this movie. You're on the edge of your seat the whole time. There was a couple dull moments, but even in those dull moments there's important things going on. This is defiantly not one of those movies you can go to the bathroom without pausing. I hate to keep rambling, because I may give up a spoiler or two. I tend to do that, but let me say just one more thing! You will not expect who is Casanova, the great kidnapper/killer. I knew who did it after re-watching, but the first time I watched it I was completely thrown off balance by the discovery of who Casanova was.

This movie is a wonderful movie! It's a great way for people to want to watch a good thriller. It's not gory, just a little blood here and there. Re-watching this, has increased my interest in reading the books. I hope you give this movie a shot. Out of five stars, I grant this 5 stars *****!! Yayy!

Would I re-watch?:
Yup, can watch this a million times and the mystery always seems new. haha