"Kidnapped by Lakota Indians as a child, Teressa Bryant was raised as a beloved member of their tribe. Ten years have erased the memory of her abduction -- and of her true family. Now called Winter Rain, she is on the verge of accepting the marriage proposal of a warrior -- until a handsome stranger appears, searching for the girl with the deep blue eyes . . . Half Lakota and half white, Chance McCloud is known to his mother's people as Wolf Shadow. Hired by Winter Rain's birth parents to bring her home, Chance soon finds himself torn between his obligation and the enchanting woman who has roused his untamed longing."

This is the second book I've read that Madeline Baker has written. I will admit it now...I had high expectations for this and it was a slight let down. It's never good to go into a book with expectations. However, I loved Lakota Love Song and I was hoping I would adore this one too, but I didn't. It was okay.

At first, I couldn't put down the book! I was highly addicted, but at about chapter 8, I found my mind drifting. There were a few dry spots scattered across the book which made the book a little hard to read. Those undry spots were wonderful! I really did like the story Madeline Baker told, but at those dry spots I would sit the book down and not pick it up for a day and not really care. There was a lot of unnessary parts scattered about. A lot of bits that had nothing really to do with the storyline. Besides that, I enjoyed all the characters and how they had faults. Characters seem more realistic and relateable when they have flaws. Like Winter Rain she was not the brightest bulb in the bunch and a little naive and Wolf Shadow was...selfish and a jerk sometimes.

All-in-all, I found myself not wanting to read this sometimes when a boring or an unnessary part came up. However, I enjoyed the story and the characters. It's hard to pick rating for this one. There's a lot of negatives, but a large amounts of positives. I think I'll have to give this book 3 stars***. I plan to read more of Madeline Baker novels in the future. =) I do recommend this book to someone who wants a light and predictable read for a lazy summer day. 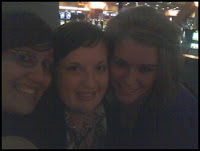