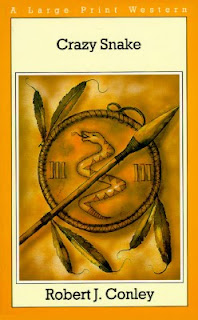 
"Based on a true story, Crazy Snake documents the moving history of the diminishing band of Creeks, bringing to life the quick violence, ready guns, and simmering anger of a people fighting to preserve their heritage, their pride, and land. Long ago the Creek people had lost their homeland in the East and were forces westward on the long trail of tears. The treaty they signed with the United States promised that they would be left alone - forever. Crazy Snake was just fourteen years old when he witnessed the betrayal of that promise..."


I'm not sure where to begin...well, I liked the book and was very awestruck at the story. I was a little disappointed too be honest. The author wrote the book to remain an unbiased third party, just watching the events. I would've preferred the story to stay focused on Crazy Snake's viewpoint. I understand that the author wrote the story this way on purpose to let the reading decide which side was in the right or wrong or whatever, but I felt nothing for any of the characters. I mean I felt bad for the Creek people (among my list of ancestors, in theory I'm also part Lakota, who knows), but I didn't feel emotionally attached with any of the characters. I felt like I was reading a history book.


The story is very interesting and still remains a highly debated topic. Crazy Snake's fate still remains a complete mystery. I would love to learn more about this man who was a leader among the Loyal Creeks and stood up to the United States' government. He tried so hard to fight for his people, but in the end he lost. If you have any interest in Native history or Creek history, you should find this book at a library near you and read it. I really wished that the author had focused more on Crazy Snake's viewpoint and not skip a lot of years and had went more into depth in some of the major events.


Out of five stars, I'll grant this novel 3 stars. I look forward to reading more of Mr. Conley's novels.