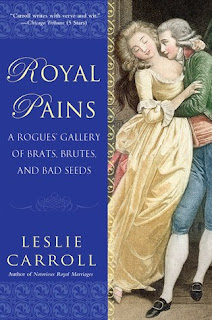 "The bad seeds on the family trees of the most powerful royal houses of Europe often became the rottenest apples. In an effort to stave off wrinkles, sixteenth-century Hungarian countess Erzsebet Bathory bathed in the blood of virgins, and for kicks and giggles devised more ingenious forms of torture than even the uberviolent autocrats Vlad 'the Impaler" Dracula and Ivan the Terrible ever imagined. Lettice Knollys strive to mimic the appearance of her cousin Elizabeth I and even stole her man. The Duke of Cumberland's sex-capades and subsequent clandestine marriage led to a law that still binds England's royal family. And the libidinous Pauline Bonaparte scandalized her imperial brother, Napoleon, by having a golden drinking goblet fashioned in the shape of her breast."

This book follows the lives of many historical royal pains. Every single one of them was horrid and lived extremely crazy lives. From Vlad the Impaler to Princess Margaret, Countess of Snowdon. This novel gives great detail about these people; not only what they did, but their childhoods and possible reasons why they did what they did. Many had very abnormal and bad childhoods. Some were just psychotic and had something wrong with their mind. Since I'm taking General Psychology right now, I found this book very helpful and a way to place my knowledge of the mind. I made a game of trying to diagnosis those rotten apples.

I loved how Leslie Carroll told each tale. Yes, she seemed to drift a little bit and talk a little too much about other people. However, I think it was necessary to understand what that royal pain had to deal with. I especially loved Leslie Carroll's writing style. She had lots of puns and plenty of wit in every paragraph. This book is a wonderful book about some of the most shady characters of the past. I enjoyed each tale she brought to the table.

Being an honest person, I must tell what I disliked about the novel. I believe she should've had more order about how she placed each story. If I had written this fantastic book, I would've done a count down. Perhaps save the biggest royal pain for last. Or in chronological order. Something like that. Also, I hated how she tended to focus too much on someone other than what the chapter was about. For example, she would spend too much time writing about Vlad's father. I tended to drift off and not focus on the beginning.

Besides for those two things, I really adored this book! It's hard to write how much I liked it. Yes, it may have been formated as a history book, but it felt like little mini-stories. It's hard to example. If you haven't read this book yet, you should! You'll learn so much about the rotten apples in the past. It really makes you appreciate living in a civilized world where people don't generally do things like that. All-in-all this book has recieved 5 out of 5 stars. ^.^ I plan to read more of Leslie Carroll's books in the future.

I'd love to read this one :D They sure did some crazy things, some weird things, and I am curious

I guess it was this one that was lost :( Hopefully it will come back, just as the missing post.

Anyway, this book..would totally wanna read it! Sounds fun to read about all those naughty and freaky royals

haha, Hopefully. But I wonder what happened to blogger last night...it was odd. I hope they fixed whatever was wrong.

It was a good book! You'd enjoy it! Just don't read it before you go to bed, you'll have odd dreams. Especially if your reading some of the more gory parts.