(This week we're not having a Wildcard Wednesday post, because I feel that book reviews are more important (sorry Wildcard posts). Plus this book/story has a special spot in my heart and I can't wait to post into until tomorrow.) 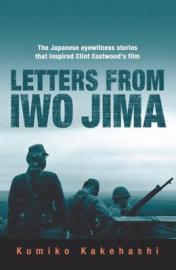 
"Letters From Iwo Jima reveals the true story of the Battle of Iwo Jima, the subject of two films directed by Clint Eastwood. Flags of Our Fathers tells the story of US Marines who raised the flag about the island: the iconic image of the war with Japan. Letters From Iwo Jima tells the story from the Japanese point of view. At the heart of this story is the maverick general Tadamichi Kuriyabashi, devoted family man, brilliant leader and the first man on the island to know they were all going to die.

As Clint Eastwood comments, 'General Kuribayashi was a unique guy. He liked America. He thought it was a mistake to go to war. American was too big an industrial complex.' Unlike most Japanese officers, he had traveled abroad, spent time in America, and was under no illusions as to the ultimate end. He fought and died to delay the Americans for as long as he could. He knew that once the island fell, it would be used as an airbase by US bombers to strike Tokyo. His unorthodox methods made this the fiercest battle the US Marines have ever faced, and he sustained resistance far longer than anyone believed possible.

Kumiko Kakehasi's heart-rending account is based on letters written home by the doomed soldiers on the island, mostly family men, conscripted late in the war. She reveals a very different Japanese army from the popular image. It is an incredibly moving portrayal of men determined to resist to the last breath."

Books like these are always hard to comment on. This is a true story based on their very real letters. As I said before, I have a respect for the Japanese. Especially for the Japanese soldiers in WWII. Even though both of my grandfathers fought in WWII, I still can't help but respect and honor these men. I especially have a high respect for every man who fought in the Battle for Iwo Jima. It was one of the bloodiest battles out of the whole war.

The book only made me tear up a couple of times, mostly when she would share a 'final message' letter that the soldiers would write to their families. At a certain point in time they stopped delivering letters from the island, so they were mostly isolated. The only form of communication was to Head Quarters, I guess. I found this terrible. The men knew that they were more than likely never to return home. Which the high majority didn't. Whole units were wiped out. Out of about 23000, only 216 were taken prisoner alive.

I really liked this book. I couldn't put it down. The book is like a car-crash, you can't help but read, even though it's terribly depressing. I loved how the author included bits and pieces of actual letters, not just summarizing what the man said to his family. I loved reading General Kuribayashi's letters to his wife and kids, I'm so glad that his family decided to share these letters.

The only thing I didn't like was how she jumped all over the place! One minute you'd be on the island with Kuribayashi, then the next moment you're in present day at a memorial. I wished she made it more in chronological order. It was just annoying sometimes, but I sort of understand why she did that.

Out of five stars, I'm granting this book 5 stars *****. I do recommend that everyone should read this sometime in their life if they have any interest in WWII or Japanese history. Or if you're just a history buff you should read it.

Oh did not know this was a book first, silly me

Same here! I didn't know until recently. I was excited to find out it was a book!