B's Monday Review: The Scotsman Who Swept Me Away by Hannah Howell 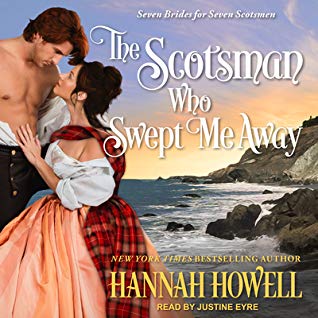 Narration
Well I really like her voice and style so all good. She is one to listen to. Justine Eyre really is perfect when it comes to historical romance.

She brings the story to life and is pleasant listening to

Story
This is the third McEnroe book. Another brother finds love, and yes it does work like a stand alone book too in that sense.

Geordie wants to see the sea so he sets out on a trip east, together with his brother Robbie. Geordie was a good guy, honorable and well yeah I can't say anything bad about him.

Belle owns a house, and rents out rooms to those that need it. She was smart, knew about medicine from her dad and did not give in.

These two fall into friendship and love. There is some drama too, her neighbor (even if that story got an ending too quickly.) There is a story with Robbie too as he has trouble with his leg after a previous accident.

The story evolved quickly and it was a short book. I do like the fast ones.

Off the New England coast, courageous Mehitabel Ampleford wields a rifle to protect her home from a brutish band of men who are after her land. She will not be intimidated, but their attacks are growing fiercer, and just as their latest confrontation threatens violence, a bold stranger appears out of the ocean mists to send the raiders packing.

Geordie MacEnroy has seen the ravages of war in his mountain town - and in the injuries suffered by his youngest brother; now, his restless soul is calling him to find sanctuary by the sea. His long journey to the beautiful coastline of his adopted homeland feels like a new beginning as lovely Mehitabel, so wise and self-sufficient, offers blessed hope for healing his brother's wounds. Geordie envisions a beautiful life with her as his bride, but a woman who has fought so fearlessly for her home may not willingly surrender all for his love....
Written By Carole Rae at 6:30 PM

Email ThisBlogThis!Share to TwitterShare to FacebookShare to Pinterest
Labels: Audiobook review, B's Mondays, Blodeuedd, hannah howell, The Scotsman who swept me away

Sometimes you just need a fast, easy romance. I like that it takes place in New England with a Scots hero. :)