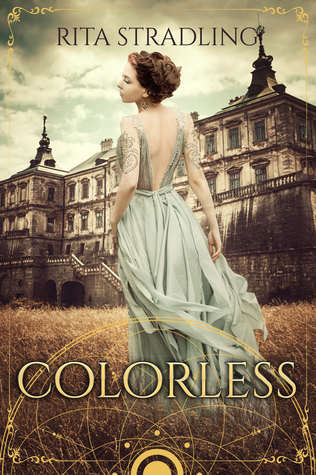 Title: Colorless
(Colorless #1)
Genre: Fantasy, Romance, YA, Mystery
Pages: Audiobook
Published: August 8th 2017
Where I Got It: My shelf (Audible)

In Domengrad, there are rules all must live by: Fear the Gods. Worship the Magicians. Forsake the Iconoclasts.

To Annabelle Klein, the rules laid down by the Magicians are the mere ramblings of stuffy old men. As far as she’s concerned, the historic Iconoclasts, heretics who nearly destroyed the Magicians so long ago, are nothing but myth. She has much more important matters to worry about.

Heiress to a manor mortgaged down to its candlesticks and betrothed to her loathsome cousin, sixteen-year-old Annabelle doubts the gods could forsake her more.

Then Annabelle is informed of her parents’ sudden and simultaneous deaths, and all of the pigment drips out of her skin and hair, leaving her colourless. Within moments, Annabelle is invisible and forgotten by all who know her.

Living like a wraith in her own home, Annabelle discovers that to regain her color she must solve the mystery behind her parents’ murders and her strange transformation.

Meanwhile, hundreds of the Magicians’ monks, with their all-black eyes and conjoined minds, have usurped control of Annabelle’s family manor. An Iconoclast is rumored to be about—a person who they claim goes unseen, unheard, and lost to memory, yet is the greatest threat to all of Domengrad. For the first time in a hundred years, the monks plan to unleash the dire wolves of old.

This caught my attention right away. The cover. The summary. All of it. I was able to get it on Audible so that worked just fine.

The story follows Annabelle. Her parents are killed and she is cursed. She loses all her colors and becomes invisible and is forgotten by all who know her. In order to restore her colors she must solve the mystery behind her parents' murder and WHY she was cursed. At the same time, forces beyond her control are hungry for power. The monks are on the hunt for her.

This was super original and I liked it a lot. I can't imagine losing my color and becoming a wraith in the world. Not seen. Not heard. Heck, not even remembered. Such a curse! And those monks! Creepy, creepy. Hate them.

The world was intriguing. I want more information and I want to understand more about these gods and magicians and Iconoclast. I would love to see more of the world through another person's eyes. We did get Annabelle's POV, Tony's POV, and Dylan's POV. But I think it would be interesting to get a book outside Annabelle's world. I know there is a prequel. Maybe I'll see if I can get my hands on that.

My only complaint was how slow the narrative was. The story did move, but it took a while. I feel there were somethings and conversations that could've been snipped a touch to help speed things along.

The twist at the end was good! I didn't expect that at all. Cannot say, but I was surprised! Curious to see how that will play a part in the next book. Which...when is that coming out? I must know what happens next!!!!! WAH! THAT DARN CLIFF-HANGER!

The narrator was entertaining. Her guy voice made me chuckle especially for Tony...but it did fit. I liked her and I hope she narrates the next one. I am curious to see what else she has read.

Besides for the slow narrative, I really did enjoy the journey. It was unique and I want to read more in this world and even more by the author. I highly recommend it if you need something different. I'll give it 4 stars.