Audiobook Review: Once a Soldier by Mary Jo Putney 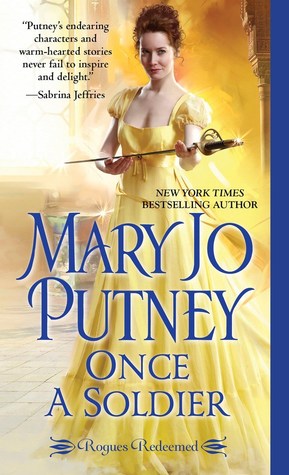 Title: Once a Soldier
(Rogues Redeemed #1)
Genre: Historical Romance
Pages: Audiobook
Published: June 28th 2016
Where I Got It: My shelf (Audible)

As heir to a title and great wealth, Will Masterson should have stayed home and tended his responsibilities. Instead he went to war. Now, after perilous years fighting the French, he intends his current mission to be his last. But all his plans are forgotten when he arrives in the small mountain stronghold of San Gabriel and meets her.

Knowing herself to be too tall, strong, and unconventional to appeal to a man, Athena Markham has always gloried in her independence. But for the first time in her life, she finds a man who might be her match.

Two of a kind, too brave for their own good, Athena and Will vow to do whatever it takes to vanquish San Gabriel's enemies. For neither will back down from death, and only together can they find happiness and a love deeper than any they'd dared imagine...

Forgot how much I like this author. I need to read more! But yes, this was a random find on Audible and I'm glad I picked it up.

The story follows Athena and Will. Will is an heir to a title and a great wealth, but due to a tragedy, he decided to run off and join the war effort. After years of war, he has one last mission before he can go home to redeem himself and pick up his responsibilities. Athena is too tall and the daughter of a fallen woman so she is living her best life as an independent woman and advisor/protector of a princess.

It is always a touch risky having a made-up country interacting with real-world things like the Napoleonic War, but it worked her. I want to learn more about this country. I wish it was real! Yummm wine.

But I liked Will and Athena right away. They were perfect for each other. I felt SO bad for both of them. They went through some big trauma in their pasts. I am so happy Will is a good man even though he is an heir to a title and can easily look past Athena's parentage. They did a lot of talking and getting to know each other. This really fit for them and I wasn't bored for a moment. Sometimes too much talking is boring, but it wasn't for this one. We learned a lot about our characters.

I also adored our side characters! Murphy and Justin! I am so happy they get to have love too. I liked the princess too. She was adorable.

There was a lot of unbelievable things that did happen. Not 100% historically accurate with how people talk, but it didn't bug me too much. It wasn't annoying or too obvious. Like the princess letting a wine merchant call her by her first name. Or the princess, Athena, Will, and Jusin go alone to have a picnic. Really? Not a single guard? Okay...

The narrator was really good! I hope she reads book 2.

Overall, this was a fun story. We get to really understand our characters. I loved our characters and I was happy our side characters got to have a HEA too. Some inaccuracies and unbelievable parts, but it didn't completely hinder me enjoying the story. I want to read the next book. I'll give this 3 stars.

Well I guess they were hankering for a deathly picknick

I've only read one of her stories in an anthology. I need to pick up a full-length one and this sounds fun with her being a princess' advisor.

I think you'd get a kick out of it!