B's Monday Review: The Duchess in His Bed by Lorraine Heath 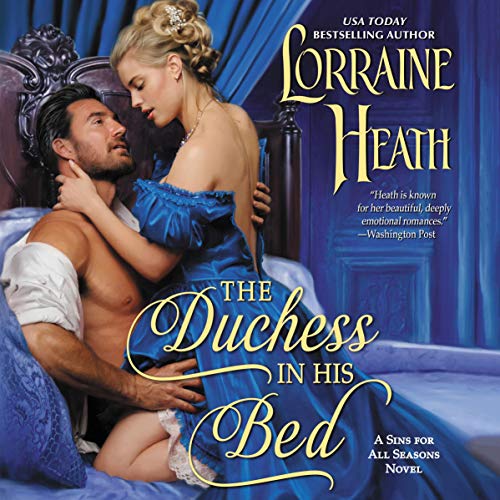 
For once I was not sure how this would end, I mean it is romance so I knew they would end up together but how?

Aiden is the bastard son of a nobleman who sold him to a babyfarm. Lucky for him a wonderful woman raised him and his other siblings. He now owns a gambling den, and one that caters to women. Women need to relax too and have some fun. And you know what, I liked all about Aiden, he was rather wonderful.

Selena is a widow and in dire straits. Her family is poor and she wants to give her siblings the freedom she did not have. But for that she would need to be raising a ducal heir, and she is not. Selena was played with this cool, calm voice and it fit her so well. She was the quintessential Duchess. I also liked that she had actually not had a bad marriage, no her husband had been kind, but they had been friends only. That is why her choices had me wondering, and  I did not know what route I wanted her to take.

Sparks fly, they really want each other.
We meet the other Trelowe bastards, an interesting bunch to be sure!

But she is a Duchess, he is a commoner. She needs money to back her siblings in society. So that is the drama.

I did have to up the speed to 2x, but that is only a good thing in my book. I liked her calm Selena voice like I mentioned before, she was marvelous. She also had nice voices for the rest too. A good reading


As owner of the Elysium Club which caters to women’s fantasies, Aiden Trewlove is accustomed to introducing adventurous ladies to sin and vice. But he is uncharacteristically intrigued by the mysterious beauty who visits his club one night, yearning to indulge in the forbidden - with him. Drawn to her indomitable spirit, he breaks his rule of never becoming personally involved with his clientele and is determined to fully awaken her desires.

A recent widow, Selena Sheffield, Duchess of Lushing, has never known passion, not until Aiden’s slow, sensual seduction leads her on a journey of discovery and incredible pleasure. But her reasons for visiting the notorious club are not all that they seem.

As Selena’s motives become complicated by love, she finds herself with a most unexpected choice: forge ahead with a secret plan that could secure her future - or follow her heart which could prove ruinous.
Written By Carole Rae at 6:30 PM

I really wonder about the other bastards

I am curious too :D

Ha ha.. the other bastards... Makes me laugh. I cant’ imagine not listening at a fast speed. When I turn it on to regular it is so SLOW>

I'm curious about what her other reason for being at the club was. Sounds good!