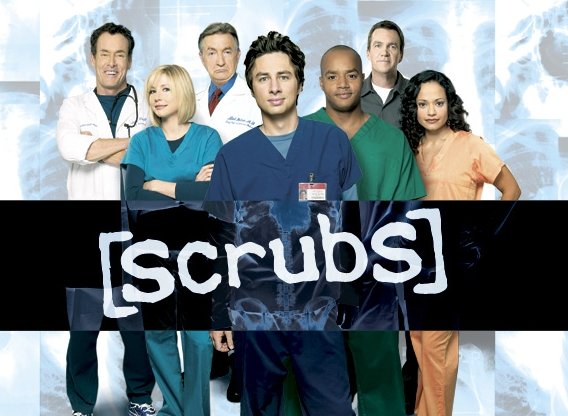 Oooo this show. I haven't watched it in years. I binged watched it in like 2013 or whenever when it was removed from Netflix. Seen it on Hulu and decided it was time to rewatch one of my favorite shows from my youth.

The show follows JD and his hospital pals. We get to see him start as a young intern until the end when he becomes the mentor himself in season 9.

And it did not disappoint! SOOO good. Still super funny. I actually even enjoyed the last season where it doesn't fully focus on our old times pals. I wasn't amused with that season back then, but I like it a touch more now. We see new faces with the old cast mainly being mentors and side characters who get some life lessons. I still wished the spotlight was mainly on  the old crew. But I get what they were trying to do. Passing the torch or whatever.

Oh naive JD. I forgot how dumb he is sometimes. Well. They are all dumb. I feel like they all go through a spell of being the asshole or super jerk.

I'll never get the JD/Elliot thing. They are basically the same person. Never wanted them to be together. The on/off thing annoyed me then and it still annoys me now. Meh. Be together or don't. I do love how after X amount of times of this nonsense even the other characters stopped caring too and were annoyed.

Carla and Turk are still my favorite characters. I like everyone in different ways. But I wanted to be Carla. I grew up to be more like Elliot...but what can ya do?

Oooo Perry and Jordan. Love them too.

The side characters are always a hoot.

The jokes are cheesy and fun. And some parts are super unrealistic. BUT it was all fun. I love the series moments too. It is not all fun and games. We get some real stuff here. Life lessons we all can take with us. Beautiful combo. Beautiful mixed together!

I am still bummed at season 9. It just...ended. I think the writers expected another season and didn't get it. It felt rush and not completed. I was shocked when Hulu said I was done. WHAT??? THAT IS IT???? NOOOO!

Honestly... I don't think this season was needed. Maybe they could've done a TV movie or something. All the fans demanded this show came back and it did but not how the fans wanted. We wanted more of the old cast, but not everyone could come back for whatever reason. Bummer, but people have lives and other responsibilities....SO I get it.

Besides for my mixed emotions on season 9, I LOVE, LOVE this show. All good. Wonderful characters. Great jokes. Great lessons. Totally worth it to just watch 1-8 and 9 is if you need just a touch more to weed yourself off the show. I will stamp this with 4 stars. It would be 5, but season 9 does lower this mathematically.

I did watch one or 2 episodes

I do not think I watched that last season, no loss

Melliane, such a classic.