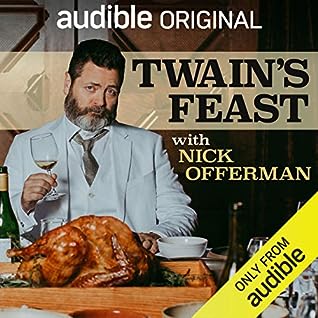 Author: Andrew Beahrs
Narrator: Nick Offerman & Andrew Beahrs
Title: Twain's Feast - Searching for America's Lost Foods in the Footsteps of Samuel Clemens
Genre: Nonfiction, Travel, History, Biography, Food/Cooking
Format: Audiobook
Published:   April 1st 2018
Where I got It: My shelf (Audible)
Summary:
Mark Twain, beloved American writer, performer, and humorist, was a self-proclaimed glutton. With the help of a chef and some friends, Nick Offerman presents the story of Twain’s life through the lens of eight of Mark Twain’s favorite foods. As we explore these foods’ role in Samuel Clemens’ life, we also discover a surprising culinary and ecological history of America. The biggest celebrity of his time, Twain was a witness to a transforming country, and with historian and writer Andrew Beahrs as a guide, Beahrs and Offerman take documentary excursions across America, illuminating each dish and bringing to life a broad sampling of Twain’s writing. Twain’s Feast is a rollicking information-packed journey into the rich culinary history of America, with the sharp eye and unmistakable wit of Mark Twain himself.
Review:
This caught my eye right away. Food, Twain, History, and Nick Offerman? Yes please.
On this journey we will get to learn more about the Samuel behind Mark Twain through his favorite foods. Along the way we will learn some historical facts, ecological facts, and get a glimpse into cooking styles of the past.
This was super informative. I will admit I know very little about Mark Twain/Samuel Clemens. I have read some of his works throughout my life and have enjoyed some of them and some only bring terrible memories of essays and discussion boards from school *shudders*. So it was really nice to see the man in a different light.
There is some doom and gloom topics mentioned. From race to the huge changes in our environment. However, there is humor throughout. We get to have some chuckles, but it is important to mention the huge topics that plagued the man and the time period. Heck, we are dealing with a lot of these issues today. Which is really sad to think about. Things have changed a lot and in many ways....but haven't changed at the same time. There is a metaphor I'm sure I could dig up and formulate.
I will say, though, I have gained a huge new respect for Mark Twain after listening to this. He really did have a way with showing and telling a story. He had such a gift of encapsulating the time period and people. He was funny, but underneath it all he was showing the world their own true nature. People are complex. They change, but in a lot of ways they never change. Ha. See? I could loop this in with my point above. People and the world change and grow, but in many ways....they don't.
Now...the food aspect. It was so very interesting. Not sure if I would want to eat some of these dishes like the turtle soup or racoon. Nope. Hard pass sir. I do adore cranberries so that was a delightful chapter.
It was also very nice they talked about the role of Thanksgiving for Samuel/Mark and the US in general throughout history. Many people really do not know the true origin of the holiday. I'll be honest....I really didn't know either. There are so many myths around this holiday and lies we tell the little kids. The first "official" Thanksgiving was called by President Lincoln in 1863 and then Thanksgiving wasn't even marked as an official Federal Holiday until 1941!
This was very informational and I really enjoyed the formatting of the audio story. They had Nick Offerman lead us, but we also got to hear from the author and guests. It was very similar to a podcast. I really enjoyed it.
Overall, this was a good listen. It was very podcast-like and easy to follow along. There is a lot of information packed into this. I am sure if I re-listened I would learn and catch things I missed before (or forgot). Just don't listen to this on an empty tummy ;) I'll stamp this with 5 stars. Totally worth the listen. 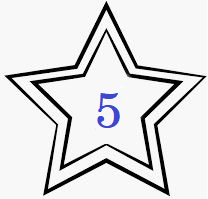 Well I never believed that peaceful beginning in olden days

Nope. It is too good to believe, but kids are so naive