Blodeuedd's Monday Review: Looking for a Cowboy by Donna Grant 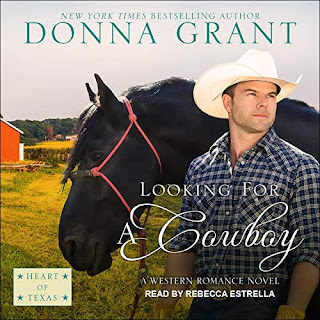 Omg, that is really the way to start this. This was dark, ok so the book is not dark, but the thing it touches upon. Damn!

Someone is murdering pregnant women, and cutting out their babies and selling them. I mean damn!

Marle's sister was a victim 10 years ago and Marlee became a PI and is not trying to solve her sister's case, and more. Which brings her to a little town to see if a newly adopted baby is one that had been cut out a week earlier. Again, dang!

Cooper is this super sweet, like awww Cooper, all the hugs!

They meet, she is investigating his friends, I thought there would be more drama around that but omg they talked!! The real drama is trying to take down the evil preggo killing baby snatcher ring. And that drama was plenty and chilling.

I did believe that these two could fall fast for each other, she does have a way of making you believe. Good romance, good drama and suspense.

I have listened to the narrator before and I do like her cowboy books, she does them so well. Great distinct voices and you just fall into the flow of things.

A beautiful stranger has come to Clearview, asking questions that are nobody's business. Cooper Owens also wasn't born yesterday. He knows that this out-of-towner is hiding a dark secret of her own. Much as he knows he should head in the other direction, he can't make himself turn away....

PI Marlee Frampton always wanted to lead a nice quiet life, working as a cop in her local police department. But that dream came to an end when her sister was murdered - and her baby kidnapped. Now Marlee's come to Texas to investigate the Harpers, who may be linked to shady adoption agencies. Cooper can't believe that his friends could be involved in anything so sinister...and soon he makes it his mission to help Marlee discover the truth - and keep her safe in his arms.

Damn! That is dark.