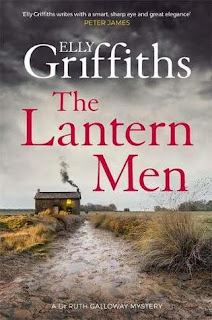 This is the last one! Well right now ;) Another book is coming next year, but now I am all caught up. I can't believe I that I read my first one in Aug. I have sped through them

Ruth has given up and gotten a new job, a new town, and she and Frank is living together. You go Ruth! Of course, even though she likes him, yeah, Ruth is a loner, she is happiest with her daughter and cats. Poor Frank, I doubt this will end well.

This one actually felt like it was more about the murder. Women who have gone missing, creepy tales of Lantern Men who lure them in and kill them. Ruth in the middle of it digging up bones, and Nelson trying to find out if a serial killer did it or not.

I liked it, I always do. I can never put them down

She has a new job, home and partner, and is no longer North Norfolk police's resident forensic archaeologist. That is, until convicted murderer Ivor March offers to make DCI Nelson a deal. Nelson was always sure that March killed more women than he was charged with. Now March confirms this, and offers to show Nelson where the other bodies are buried - but only if Ruth will do the digging.

Curious, but wary, Ruth agrees. March tells Ruth that he killed four more women and that their bodies are buried near a village bordering the fens, said to be haunted by the Lantern Men, mysterious figures holding lights that lure travellers to their deaths.

Is March himself a lantern man, luring Ruth back to Norfolk? What is his plan, and why is she so crucial to it? And are the killings really over?

It's great when you have a book you can't put down

Agreed Melliane! It's so nice to get one you can't put down.

I do love these :D

All caught up! Both happy and sad when that happens. Glad the mystery was really strong.