Blodeuedd's Monday Review: A Highlander is Coming to Town by Laura Trentham 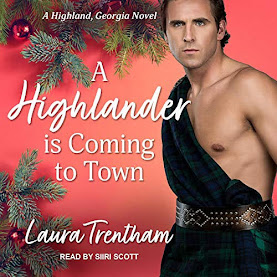 Claire is running from her past, which is being rich and one day taking part in her family's company...did I understand her need for hiding? No. Did I understand her fear of being recognized? No, sure her family owns a whisky company in Scotland but even a Scot would not recognize some random rich heiress. And she never talks to her family. I would just have said suck it, and leave it be. It felt like she was from some mob family at times, she was hiding from them cos they would like kill her. It was really strange.

So she is hiding, works for an old lady, short for cash and she is happy.

Holt is working on his family farm, his parents are living it up in Florida, and he is just a really nice guy. Like really nice.

They meet. She is reluctant. He is nice and helpful. They fall for each other. The drama is that she should go back to her family for her inheritance. I mean can't she deal with the family company and live in the US? Yes I just did not understand her issues.

I mean I liked it, but I so did not understand Claire's issues, like boohoo, I am rich

I liked the narrator. She was great and I liked how she voiced it. So she made it worth it

Sadness, false advertising, the guy does not wear a kilt nor is he a highlander

Holt Pierson is dreading Christmas. His parents absconded to Florida for the season and left him to handle the family farm which will be his one day―whether he wants it or not. Driven by duty, Holt has always followed the path expected of him. But lately, he’s been questioning what he wants and where he belongs. Will assuming the responsibility of the Pierson farm make him happy or is there something―or someone―else out in the wider world calling to him?

To Claire Smythe, the Scottish lead singer of a touring band, Highland, Georgia, is the perfect place to hide . . .until a very handsome and deeply curious Holt begins to ask all the questions Claire doesn’t want to answer. As Holt draws Claire out from under and into the fabric of small-town life, can Claire put the past behind her and embrace the unexpected gifts of the season―including the new and lasting love?

Oh too bad the cover doesn't match. I was all like highlander and Christmas? I'm in!

Mel
Right!!!! SO was I, instead I got a farmer and a woman from Scotland, sobs