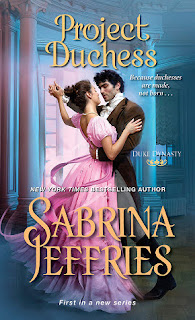 Dukes! yes there is nothing like a Duke in a book, and omg, this book has 3! All with the same mother. WHaat? No way! Yes way.

First, I need her story. Her first marriage, her second, her third happy one and I sort of want her to marry a 4th Duke one day.

Right, but this is about her firstborn, Greycourt. A rocky relationship since he was sent back to England when he was 10 (not her fault.) He has some hidden anger issues, he is known asa  rake, aren't they all! But he is a really sweet guy.

Beatrice had a bad time too after her parents died and she had to live with her asshat uncle.

And how did her uncle die? And how did his brother die just months after?
Gotta find out.

They flirt, they should be together, oh uh, did someone murder anyone? And they lived happily ever after

A series of stepfathers and a difficult childhood have left Fletcher “Grey” Pryde, 5th Duke of Greycourt, with a guarded heart, enviable wealth, and the undeserved reputation of a rogue. Grey’s focus on expanding his dukedom allows him little time to find a wife. But when his mother is widowed yet again and he meets the charmingly unconventional woman managing his stepfather’s funeral, he’s shocked to discover how much they have in common. Still, Grey isn’t interested in love, no matter how pretty, or delightfully outspoken, the lady . . .
Beatrice Wolfe gave up on romance long ago, and the arrogant Duke of Greycourt with his rakish reputation isn’t exactly changing her mind. Then Grey agrees to assist his grief-stricken mother with her latest “project”: schooling spirited, unfashionable Beatrice for her debut. Now that Beatrice is seeing through Grey’s charms to his wounded heart, she’s having trouble keeping him at arm’s length. But once Grey starts digging into her family’s secrets, she must decide whether her loyalties lie with her family . . . or with the man whose lessons capture her heart . . .

You remind me that I really need to try a Sabrina Jeffries. Three dukes? That gal needs to play the lottery.