Book Review: The Girl from Vichy by Andie Newton 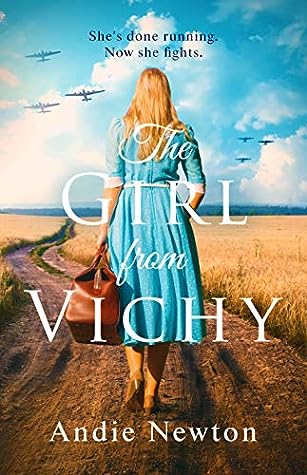 Author: Andie Newton
Title: The Girl from Vichy
Genre: Historical Fiction
Format: ebook
Published: August 13th 2020
Where I Got It: My shelf (Netgalley)

Summary: 1942, occupied France.
As the war in Europe rages on, Adèle Ambeh dreams of a France that is free from the clutches of the new regime. The date of her marriage to a ruthless man is drawing closer, and she only has one choice – she must run.
With the help of her mother, Adèle flees to Lyon, seeking refuge at the Sisters of Notre Dame de la Compassion. From the outside this is a simple nunnery, but the sisters are secretly aiding the French Resistance, hiding and supplying the fighters with weapons.
While it is not quite the escape Adèle imagined, she is drawn to the nuns and quickly finds herself part of the resistance. But her new role means she must return to Vichy, and those she left behind, no matter the cost.
Each day is filled with a different danger and as she begins to fall for another man, Adèle's entire world could come crashing down around her.
Adèle must fight for her family, her own destiny, as well as her country.


Review:
I couldn't wait to read this! I loooooove spy novels and wwii stories.
The story follows Adele who started as a girl just running away from a terrible man who she is being forced to marry as war in Europe rages on. She hides and takes refuge at the Sisters of Notre Dame de la Compassion. From the outside this looks like a simple nunnery, but the sisters are secretly helping the French Resistance. Adele is drawn to the nuns and quickly finds herself part of the resistance, but her new role means she has to return home. Adele must fight for her family, destiny, love, and for her country.
I will admit the beginning did not capture me right away. It took a while for me to really warm up to our characters and the story itself. It was a little slow while we were waiting for Adele to figure out the truth about the nunnery.
Once a certain event happened and Adele's world went spiraling to the spy world then I was invested and finished reading the rest of the book in one day. I simply could NOT put this down!!! SOOOO good.
Poor Adele. I was so mad at her dad and her sister. They were just soooooo blind. I would've had a hard time dealing with them and keeping a straight face. I get it...family is family....but still.....they needed a good shaking.
I adored Luc. I wish we had more time with him overall.
Adele's partner (I won't name names because that is a huge spoiler) was my hero. I felt so bad for this character but I had to applaud for the character's bravery and loyalty.
OOOOoooOOOOoooOOOOooooOOOOOO that ending was amazing. I did get a little tear of joy there. That was so powerful.
Overall, I really liked this book. The beginning was a little rough for me but after a certain event I simply could not put it down. This had everything you would want in a spy novel during wartime. Action, romance, drama. That ending even gave me a little tear of joy. I'll give this 4 stars.

Thanks for this great review! And thanks for being part of the tour. I will be thinking about:"OOOOoooOOOOoooOOOOooooOOOOOO that ending was amazing" all day! :)

Thank you so much for your great review! I'm so glad you enjoyed it!

Well, it sounds abso-fab to me, but I'm glad to know patience is needed in the beginning.

France back then, this would be intense

Nice! I'll have to keep this in mind.

Andie, awww thank you for stopping by and including me on the tour. :) I really enjoyed it.

Sophia, yess. A wee bit of patience and you will get one heck of a good story.

B, I can't even imagine.