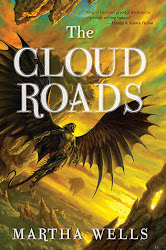 Paperback, 278 pages
Published March 15th 2011 by Night Shade Books
Series: The Books of the Raksura #1
Fantasy
Own
The idea behind it all was good, I guess. Honestly I am not sure I get their society. They are like bees and are all related? I mean there is one queen and one guy so...
Anyway we have brooding Moon who wants to belong.
There are baddies in the sky, ground.
There are so many different sentient species. I'd say too many, how did so many evolve?
Oh right, Moon. He wants to find others like him. Drama.
I do not know. I was just not that into it. Did I read it? Yes, do I want more...no, but I would like to see where he came from. If the library had it I would skim it.
Moon has spent his life hiding what he is — a shape-shifter able to transform himself into a winged creature of flight. An orphan with only vague memories of his own kind, Moon tries to fit in among the tribes of his river valley, with mixed success. Just as Moon is once again cast out by his adopted tribe, he discovers a shape-shifter like himself... someone who seems to know exactly what he is, who promises that Moon will be welcomed into his community. What this stranger doesn't tell Moon is that his presence will tip the balance of power... that his extraordinary lineage is crucial to the colony's survival... and that his people face extinction at the hands of the dreaded Fell! Now Moon must overcome a lifetime of conditioning in order to save himself... and his newfound kin.
Written By Carole Rae at 6:30 PM

So disappointed, this is the murderbot author after all

You are right!!! I was wondering how that author name sounded so familiar.