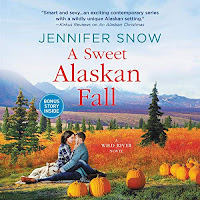 Montana is a adrenaline junkie, but after a accident she had to give it up. Even her kid. Yes that was pretty heartbreaking. Her brain took a hit that sometimes she just has these blackouts, so she spent 10 years with her parents instead.

Now she is back, starting a new career, getting to know her kid. It also seems I missed some drama in the previous book when she came back to her ex and his new girlfriend. Maybe for the best . I still do not understand the whole giving up for 10 years, I mean couldn't she have lived in the same city and had visits with her daughter that were supervised?

Anyway she is back, building a life. Trying to connect with her hunky neighbor Eddie.

But then there is some drama, and Eddie is hurt. I liked Eddie, he was such a good man, and now his life is totally different because of an act of violence.

Good narrator. I liked her voices and she set a nice pace and tone to the story

Montana Banks has returned to Wild River, Alaska, for a fresh start. Adventure has always been in her blood, but while an injury leaves her unable to participate in her favorite extreme sports, Montana settles for teaching base-jumping classes at her friend's tour company. Settling in has been almost too easy: a great job, her family's acceptance and her own apartment--right next door to straitlaced police officer Eddie Sanders.

Eddie has always had feelings for Montana, and now that he's leaving for a new job in Anchorage he wonders if he should've taken a chance with her sooner. Then a moment of violence the night of his going-away party leaves him badly wounded. Seeing Eddie's job opportunity lost and self-confidence following close behind, Montana is determined to show him all the reasons he has to pick himself up again.

Hmm, I like the setting and what seems to be happening between her and Eddie, but that does sound squirrelly about the ten years away from her kid.