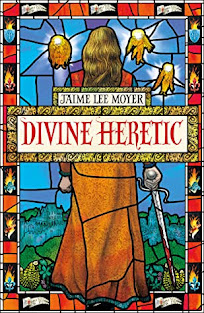 I was a bit hesitant, because come on, Joanne d'Arc, that wont end well! But, it blew me away and at the end I was happy. It was perfectly told.

The writing was light, and suddenly I was at page 100. The pages really flew away, and this is more the origin story of hers.

She is a shepherd's daughter. The English are roaming the countryside, and she gets visions early on. And it was so well done because who are those that come to her? Angels? Demons? Or the Fae? Why do they come to her? And why are they such utter bastards? They say she is destined to free France, and it can only be her, if she refuse they will hurt her. Yes,they were bastards. I liked seeing her growing up because it shaped her. I did wonder where the whole La Pucelle thing would come in, but I did not mind, I liked actually getting to know Joanne. To see a real person behind the story.

It was not what I expected, I guess I thought a war heavy historical. Instead I got a lighter growing up story, and giving up to the fate trusted upon her. I liked the side characters as her brother, and Ethan. You will see.

And I liked how it ended too. I was glad to have read it, and I did finish it in a day (it helped that I was home with a sick kid so I could read all day)

Final thoughts: I'd say definitely read it, it is not what you expect it to be

Blurb: Everyone knows the story of Joan of Arc, a peasant girl who put Charles VII on the throne and spearheaded France's victory over Britain before being burned by the English as a heretic and witch.

But things are not always as they appear.

Jeanne d'Arc was only five when three angels and saints first came to her. Shrouded by a halo of heavenly light, she believed their claim to be holy. The Archangel Michael and Saint Margaret told her she was the foretold Warrior Maid of Lorraine, fated to free France and put a king upon his throne.

Saint Catherine made her promise to obey their commands and embrace her destiny; the three saints would guide her every step. Jeanne bound herself to these creatures without knowing what she'd done. As she got older, Jeanne grew to mistrust and fear the voices, and they didn't hesitate to punish her cruelly for disobedience. She quickly learned that their cherished prophecy was more important than the girl expected to make it come true.

Jeanne is only a shepherd's daughter, not the Warrior Maid of the prophecy, but she is stubborn and rebellious, and finds ways to avoid doing - and being - what these creatures want. Resistance has a terrifying price, but Jeanne is determined to fight for the life she wants.

But when the cost grows too high, Jeanne will risk everything to save her brother, her one true friend and the man she loves.

Not everyone is destined to be a hero. Sometimes you have no choice.

Giiiirrrlll you do have my intrigued.

Okay, yes, I would have passed it up because it's one of those stories that the end leaves me with no desire to see again. But, you intrigue me with this lighter one that tells her coming of age story and isn't such a drudge to read.