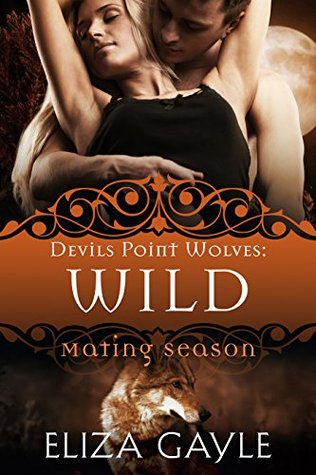 Summary: Faith is on the cusp of having it all. She made it through the last of her college finals and is looking forward to starting her career. If only her twin would answer her damned phone. After three days of no word, she's forced to drive to Devils Point and search for her. As her luck goes, things go south the minute she hits creepy island. Starting with a wolf attack that lands her in hot water with her sister's bad ass boss.
Damien just wants to get through Mating Season and get back to normal. His would be mate is not at all what he expected and not exactly his type. Not to mention off limits. Until she shows up smelling like another wolf. Now all bets are off and this Alpha will do anything to protect her--including claim her.


Review: Been itching for a werewolf book for a little bit and then I seen this freebie on Amazon so I decided to give a try.
Faith is on the cusp of having it all. She made it through her exams and is looking forward to her promising career. However, her sister has not gotten back to her in 3 days so she is forced to track her down and drive to Devils Point and find her. In the middle of looking for her, she comes across a wolf that attacks her. Damien just wants to get through Mating Season and get back to normal business. He has a business to run! And to top it all off his supposed mate, Faith, shows up smelling another wolf. Now he has to protect and try to claim her as his own before another wolf does.
This was short and sweet. Finished it in a couple of sittings. No real huge drama accept for the fact that Faith is introduced into the wolf world of course and she has to make a decision if she wants to be Damien's mate or not. WHICH I really approve of the whole consent thing. Sure she is supposed to be his mate...but she can totally opt out if she wants. Sure Alpha Damien convinces her that now she was bitten and his mate she should stay and it would be safer that way....but it was still her choice overall. I like that aspect a lot.
I will say I HATE their names. Faith and Rebel? Twins? Faith is the good one and Rebel...is well...the rebel and does what she wants? Okay. >_<
Faith was okay...she was annoyingly perfect though. I think she took all the reveals too easily.
Can I just say I do not like Rebel? She is a snot. Poor Faith having to deal with her. Poor Rebel's future mate (her story is book 2). SMH. Such a rude person. I really do not want to read book 2 because of her. Maybe she'll get better?
Damien was sweet. He was alpha but not over-the-top which was nice and refreshing for this genre.
Overall...this was short and sweet. Some refreshing aspects like the Alpha not being over-the-top and there was consent with this whole mate thing. I'll give this 3 stars.

How lucky Rebel became a rebel then *eyeroll*

But the cover - so steamy! lol

I agree that it's nice that the mate part comes with the ability to make a choice. Rebel is a rebel. Hopefully, she loses some of the attitude in her own book.

Sophia, I hope she does!