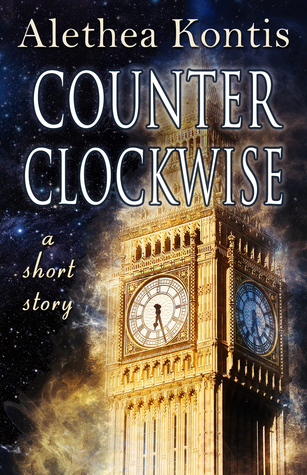 Author: Alethea Kontis
Narrator: Danielle O'Farrell
Title: Counterclockwise: A Short Story
Genre: Romance, SciFi, WhatIf, Fantasy, Short Story
Format: Audiobook
Published: May 9th 2017
Where I got It: My shelf (audible)
Summary: Imagine a universe where, on November 5, 1605, Guy Fawkes's Gunpowder Plot was successful. The explosion resulted in a schism that split the British Prime Universe into two more planes of existence: one that went forwards in time (clockwise), and one that went backwards (counterclockwise, or widdershins). On All Hallows Eve every year, the bonds between these multiverses are strong enough to pull a body from one plane of existence to the other.
Edith Hornby lives in the clockwise universe--Edward Moriarty lives widdershins. But they meet often enough throughout their lives to form a bond even stronger than that which holds the universes together...
Review:
I randomly stumbled upon this one in Audible while I was looking for something short and sweet to finish up my work week. This caught my eye right away. I didn't even read the summary. I just started listening (I should do this more often)
In this story, Nov 5th happened. Guy Fawke's Gunpowder Plot was successful. However, it resulted in a schism that split the British Prime Universe into two planes of existence. Every Hallows Eve the bonds that keep the multiverses apart pulls a body from one plane of existence to the other for one day. Edith Hornby lives in the clockwise universe and Edward Moritarty lives in the widdershins. However, they keep meeting each other throughout their lives and they form a bond and love that transcends all universes.
This was very sweet and very sad. I felt bad for them because they could never, ever be together like how they want. It reminded me of the Doctor Who and River Song. So sad.
It was fun to watch everything from Edith's eyes. I do wish we could've seen more of Edward and what he had to go through. Maybe another book? *hint hint* But I liked both of them.
I do feel this could've been an amazing read. Don't get me wrong... I liked it a lot, but it could've been amazing. I feel there could've been more for these characters and more for this world. It is such a GREAT concept. I felt like this was a cliffnotes version.
The narrator was good. She did a wonderful job. I would like to listen to more.
Overall, I liked this. It was sweet and short. I do want more from these characters and from this world. I'll give this 3 stars.

What an interesting concept. I will have to tuck this away for when I need a quick listen! Thanks.

It was super duper quick to listen to :) For sure good for a long car drive or something.

Now, that puts a twist on the people separated by time in a good time traveler romance. Maybe if the author does Edward's side it will fill in some of that feeling of it needing more development. We can dream!

Sophia, I agree! I think seeing his side will help