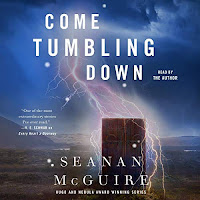 Narrated by: Seanan McGuire
Series: Wayward Children, Book 5
Length: 3 hrs and 52 mins
Unabridged Audiobook
Release date: 01-07-20
Language: English
Publisher: Macmillan Audio
Portal fantasy
Library
Either this one was the worst one, or it was the fact that the author narrated. I just could not focus or be interested. And I adore this series. I never felt invested.
Blah blah adventure, Jill and Jack are back. Have to go back to the moors. I, yeah I was just not that invested. I love her books, but maybe her narrating just wasn't for me.
You can just skip this one in the series.
When Jack left Eleanor West's School for Wayward Children, she was carrying the body of her deliciously deranged sister - whom she had recently murdered in a fit of righteous justice - back to their home on the Moors.
But death in their adopted world isn't always as permanent as it is here, and when Jack is herself carried back into the school, it becomes clear that something has happened to her. Something terrible. Something of which only the maddest of scientists could conceive. Something only her friends are equipped to help her overcome.
Eleanor West's "No Quests" rule is about to be broken.
Written By Carole Rae at 6:30 PM

What a shame that a favorite series produced a dud. Hopefully, the next one will work better.

That's too bad about this one

Sophia
I hope so! I truly do