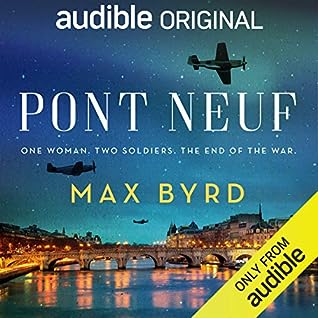 In the summer of 1944, Annabella “Annie” March, a young American woman, arrives in France intending to write about the war. But when she finds herself overshadowed by her sometimes-mentor, sometimes-rival Martha Gellhorn - and Gellhorn’s troublesome husband, the novelist Ernest Hemingway - Annie turns to photography in search of the professional gratification she’s looking for.


I think I needed a good WWII book. It has been soooo long since I have and it seemed like fate when this popped up as a freebie from Audible!


The story follows Annie in 1944. She is an American woman who arrives in France intending to write and take photos during the war. She meets Martha who is married to Ernest Hemingway and is also there to write. Along their journey, they meet two young soldiers who have been friends since their college days. Unknowingly their paths will intertwine through the war.


I should've smelled a love triangle from the moment I read "One woman. Two Soldiers". Sighs. Luckily it wasn't a true love triangle, because this is real life and there is a war going on. This made me happy. Not the war...but there was no annoying going back and forth. She likes both, but there are no promises between anyone. There is a war going on. They enjoy the time they get to spend with each other even the guy friends. Plus, the "love" going on was just background noise. It was not the main focus. The characters getting through the war are our main concerns.


Ugh Martha. I wanted to smack her and Ernest. Just get a divorce. You hate each other.


I really liked how this was written. It felt like Annie was writing this like one of her articles. The little foreshadows were fun.


Now....my biggest issue was the ending. Sooooo..........what happened? Can we please get an epilogue? We just have this intense scene on the bridge and then everyone walks away. What happened? Not amused at all. I can guess....but can I? Sighs.


The narrator was awesome. She really made this story and the characters. I'm sure I have heard her before. She is great. I do not think I would've liked this as much as I did if I had read it. She really brought it alive for me.

Overall, I really did like this. The love triangle didn't kill me like it normally does. It was done realistically. There is a damn war going on! The boys got real problems and so does Annie! The ending made me mad...so that takes away a star. All-in-all, worth the listen. I'll stamp this with 3 stars.

Ugh to abrupt endings that make you hope you're guessing right about the future. LOL, yeah, that Hemingway marriage was a rough one from what I've read.

Freebie? wHaaat? Love it
As for the book itself, meh

Sophia, yesss they both seem like rough people to be married to. And yessss, not happy with the ending.

I'm sorry some readers didn't understand the ending. I regret that I didn't make it clear enough. The action is simple. the protagonist is faced with the choice of shooting a little girl or saving his men from a German patrol. He chooses to shoot, but that choice, forced on him by war, is unbearable. He throws down his rifle and walks away, a deserter. (Desertion has been foreshadowed as a theme.) The last scene on the bridge is the attempt of his friend and Annie to bring him back, but killing the girl has also, in a real sense, killed him. Thanks for reading. Max Byrd

Thank Max! That really does help me. Maybe I need to read this again instead of doing the audiobook.

May I add to the remarks about my novel "Pont Neuf"---the NY Times has just reviewed it. The reviewer had no problem with the ending.

That's awesome! :) Like I said I should maybe try reading it again