Blodeuedd's Monday Review: This Light Between Us by Andrew Fukuda 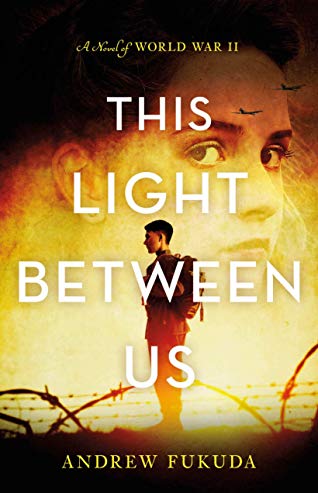 I knew it would come a time when this would turn sad, and I kept on hoping that there would be light at the end of that tunnel.

Two 10 year olds become penpals. A world apart, and they will come to mean everything to each other. Alex is Japanese-American, who grows up on a strawberry farm. Charlie is Jewish and lives in Paris.

They keep on writing and the years go by. Charlie sees how people change, soon there are Germans in the streets, but nothing bad could ever happen, right?

People are stupid, people are evil. Why weren't every German American or Italian American in camps then too? I guess there had to be on evil enemy that did not look like the rest. I guess one has to be grateful that everyone was just not killed outright.

And I kept wondering about Charlie. Since there are no more letters due to obvious reasons we have no idea knowing what happens to her.

The cover does tell that he will enlist. And of course he will search for her, and break my heart.

The narrator was great. He sounded familiar, but I have not listened to him before. He did well with their different voices and I felt I was right there, on suicide hill.

A good book, that would make a really good movie. Oh this is really one of those that needs to be a movie too. Especially in these times.

In 1935, ten-year-old Alex Maki from Bainbridge Island, Washington is disgusted when he's forced to become pen pals with Charlie Levy of Paris, France--a girl. He thought she was a boy. In spite of Alex's reluctance, their letters continue to fly across the Atlantic--and along with them the shared hopes and dreams of friendship. Until the Japanese attack on Pearl Harbor and the growing Nazi persecution of Jews force them to confront the darkest aspects of human nature.

From the desolation of an internment camp on the plains of Manzanar to the horrors of Auschwitz and the devastation of European battlefields, the only thing they can hold onto are the memories of their letters. But nothing can dispel the light between them.
Written By Carole Rae at 6:30 PM

Email ThisBlogThis!Share to TwitterShare to FacebookShare to Pinterest
Labels: Andrew Fukuda, B's Mondays, Blodeuedd, This Light Between Us

This does sound like it would be a good movie!

I can see this one is a real heartbreaker with them coming from the backgrounds they do. WWII was a hard time, for sure. Some of my Sicilian family were in internment camps while a few of them fought for America in the war.
If this were a movie, I'd probably end up sobbing away through part. (the movies always hit me even harder than books). :)

Sophia
The movies do hit harder and here, omg yes it would have me sobbing