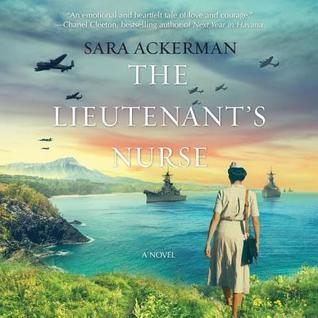 My Thoughts
How to begin, well it takes a while to get to the battle, but I liked that. Eva is on her ship, she meets a handsome soldier, there are feelings, but she has someone already on Hawaii. No, not a love triangle, it was more that her dad wanted them together and he was a really nice guy.

One strange thing though is her roommate, who then is never mentioned after she embarks...

Anyway, while we are on the ship there are short chapters about how the Japanese are sailing towards Hawaii too. Even though I know her ship will be fine it does feel dramatic.

And then obviously we later on will have Pearl Harbor and what that entails. And being a nurse she is in the middle of it. Heartbreaking and tragic.

Eva had secrets, but it is easy to guess as we get flashbacks. Not her fault, but it has consequences. I liked her, she was a great nurse who cared about patients.

And a certain lieutenant, well he does not really have secrets in that way, it is more what his job is. A really good guy.

One thing that struck me is that I would like to read a book how those of Japanese origin was treated during the war. I know what went on on the mainland, but what about here? There were so many there.

There is also suspense, how much did the US know about a coming attack?

Narration
She did a good job with different voices. I liked how she did the Japanese Navy flashes, it brought suspense to it all.

A good one to listen at.

Blurb
She's never even seen the ocean before, but Eva Cassidy has her reasons for making the crossing to Hawaii, and they run a lot deeper than escaping a harsh Michigan winter. Newly enlisted as an Army Corps nurse, Eva is stunned by the splendor she experiences aboard the steamship SS Lurline; even more so by Lt. Clark Spencer, a man she is drawn to but who clearly has secrets of his own. But Eva's past-and the future she's trying to create-means that she's not free to follow her heart. Clark is a navy intelligence officer, and he warns her that the United States won't be able to hold off joining the war for long, but nothing can prepare them for the surprise attack that will change the world they know.In the wake of the bombing of Pearl Harbor, Eva and her fellow nurses band together for the immense duty of keeping the American wounded alive. And the danger that finds Eva threatens everything she holds dear. Amid the chaos and heartbreak, Eva will have to decide whom to trust and how far she will go to protect those she loves.
Written By Carole Rae at 7:34 PM