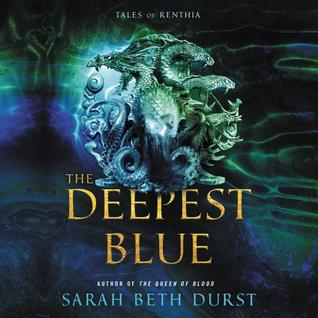 My Thoughts
Well this was a horrible place to live! Poor people! There are spirits everywhere, and these spirits hate humans and wants to kill them all, niiice. The only thing that holds them in check is the Queen of the land and heirs. But no one controls the wild ones so they can just go and kill you like that.

But that is not the worst in away, not for the main character. See if you magic you have 3 choices. Hide it as long as you can. Get sent to this hellish island where spirits will try to kill you for a month and if you survive you get to be an Heir, and fight spirits until your end days. Or be a Silent One and never see your family again. Oh this system sucks!

Was this YA? I mean it did feel like YA, but at the same time she gets married. She has a great relationship with him, and there is no romance. Oh you know me and YA ;) But yes I loved the interactions between her and her husband to be. They loved each other. No other people in sight. SO double worse for her to show her powers and be sent away from him.

I really liked this world, it is one crazy world! I did not know that her previous series was set here too, but on the mainland? Since this was the islands. I would like to read those too. As this one was a stand alone and truly worked like that. But hey if there is more then I am in.

I liked Mayara. She wanted to survive, but she was also a nurturer as we will see, and not great on her own. All good things in a way, you will see. There is danger and fighting, lots and lots of fighting, and death.

Final thoughts.
I liked it

Narration
She did well with female and male voices. If to be fair the only male voice was the hubbie, and this evil Lord for a few sentences. This is a very female driven book. But she made great effort to show the differences in their voices.

I also liked the spirits voices and esp the old ones.

Blurb
Life is precious and precarious on the islands of Belene. Besieged by a capricious ocean full of malicious spirits, the people of the islands seek joy where they can. Mayara, one of the island’s fearless oyster divers, has found happiness in love. But on the day of her wedding to the artist Kelo, a spirit-driven storm hits the island with deadly force.

To save her loved ones, Mayara reveals a dangerous secret: she has the power to control the spirits. When the storm ends, she is taken into custody by the queen’s soldiers and imprisoned with other women like her.

They vary in age and social status, but to many they are heroes who will aide the country or witches that will sacrifice themselves trying. No matter who they are, the women are sent to a terrifying place—an island filled with bloodthirsty nature spirits, and left without food, water, shelter, or any tools except their own instincts and magic. Whoever survives the Island of Testing will be declared heirs to the queen. But no matter if she wins or loses, Mayara knows that the life she dreamed of is gone.
Written By Carole Rae at 6:30 PM

Oh everyone is reading this one!

It sounds good, but yeah, that is one messed up system for magic people.

Melliane, it seems so :D

Carole
I do want her other series :D