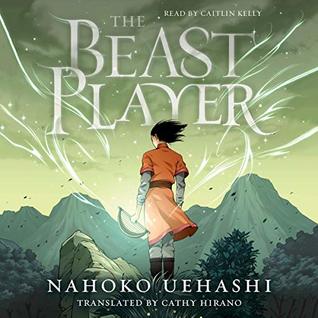 My Thoughts
I enjoyed this one. Wow, was it actually almost 15 hours? It did not feel like that, I listened to it really quickly.

It follows Elin, whose mother is killed at the beginning when the serpents under her care die. (yes aholes much!) The rest of Elin's family is nothing to have and she is sent away.

There was a lot of bee talk. Complicated creatures. But I liked it, Elin is 10 and she needed something stable. I liked her time there. Will say no more.

Then there is a school and beasts. This country uses water serpents to fight and then there are the royal beasts that are treasured beyond all as a symbol for the country. Elin comes into her own here. She is a very peculiar 10 year old, she loves to question things and think things true. And she does not loose that as she grows up.

The world was well done too. I felt I was there. The bees made it so.

The end, well it must be a series since this is book 1 and 2. And there are a book 3 and 4 too in Japanese. And I can not read the blurb, srsly, I want to know! Is it about Elin still? About something else. Ok I have to ask someone. Because it does end, sort of good. Happy for now, but things are not calm.

Narrator
She did a great job with male and female, old and young. I felt Elin grow under her narration and it fit her well.

I think this was my first narration by her and I would listen to her again. She felt good for fantasy too

Blurb
Elin's family has an important responsibility: caring for the fearsome water serpents that form the core of their kingdom's army. So when some of the beasts mysteriously die, Elin's mother is sentenced to death as punishment. With her last breath she manages to send her daughter to safety.

Alone, far from home, Elin soon discovers that she can talk to both the terrifying water serpents and the majestic flying beasts that guard her queen. This skill gives her great powers, but it also involves her in deadly plots that could cost her life. Can she save herself and prevent her beloved beasts from being used as tools of war? Or is there no way of escaping the terrible battles to come?
Written By Carole Rae at 6:30 PM

well a book with all the phases to grow up

Sophia
I did like this world, the author made it real :D

Mel
That it was