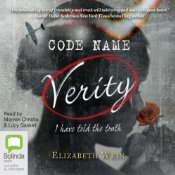 Oct. 11th, 1943—A British spy plane crashes in Nazi-occupied France. Its pilot and passenger are best friends. One of the girls has a chance at survival. The other has lost the game before it's barely begun.

When “Verity” is arrested by the Gestapo, she's sure she doesn’t stand a chance. As a secret agent captured in enemy territory, she’s living a spy’s worst nightmare. Her Nazi interrogators give her a simple choice: reveal her mission or face a grisly execution.

As she intricately weaves her confession, Verity uncovers her past, how she became friends with the pilot Maddie, and why she left Maddie in the wrecked fuselage of their plane. On each new scrap of paper, Verity battles for her life, confronting her views on courage and failure and her desperate hope to make it home. But will trading her secrets be enough to save her from the enemy?

My thoughts:
There are things in this review I can not tell, things that happen later, but I really can not say anything, so I will focus on the story being told in the beginning.

We have Maddie, who loves flying and working on engines. She is working on getting her license, and she is a woman in a man's world, but she loves it. But then obviously the war starts and she she will join in the only way she can. Ferrying planes. We also see how she meet her best friend Queenie.

But all of this is told in France, when the Gestapo is trying to get out every piece of information. Having her write it on whatever they can find. And the story is told. The crash, life in England, info on planes and such.

And there is also another story told, but hey, I already said I could not speak of it...

It took me almost a year to listen to it. Not that it was bad, but because I first had the book on my old phone, and then I got a new one and sigh, not compatible since I refuse to upgrade to win10 cos that sucks. SO put it in my old mp3 player...and yes it took some time to listen to it. But I was never bored, I think I had a rocky start but can not remember. I even started crying when out walking once cos it got sad, and I am so glad I did not meet anyone on that walk.

Is this YA? I guess so, bloody sad YA if so. With the torture and well war and so on...

Conclusion:
But it was good, and the narrator did a great job.