Book Review: Forever and One Week by Caroline Cairn 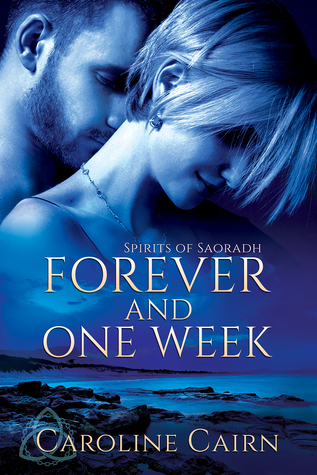 Author: Caroline Cairn
Titles: Forever and One Week (Spirits of Saoradh #2)
Genre: Paranormal Romance & Fantasy
Pages: ebook
First Published: April 2016
Where I Got It: My shelf (Given to me by the author/publisher for my honest and unbiased opinion)

The Spirits of Saoradh, who carry the guilt of a crime they committed when they were alive, now spend their ghostly days in the Void, dark nothingness where time and space are distorted. Until they get bound to a human. As often as needed, that human can call them to the real world, ask them to grant a wish, then send them back to the Void. The Spirits also have to follow strict rules or be punished, unaware that they can earn their redemption through a selfless sacrifice.

Spirit Logan despises the obedience he has to show to his humans, and prefers the enjoyable solitude of the Void. For three years, he has managed to threaten them into severing their bond, thus having his memory wiped of their existence. Except his latest human, an emotionless woman with a secret past, isn’t scared of him. Worse, she doesn’t care about his ability to make wishes come true.

Tessa, a twenty-six-year-old nursery teacher in Fort William, Scotland, doesn’t expect a sullen ghost only she can see and touch to burst through her solid defenses. Both dismayed and intrigued, she offers Logan a deal he can’t refuse: to live with her in the human world for one week, at the end of which she will agree to release him.
Slowly, Tessa braves through the safety of her detachment towards people to show Logan some kindness. But the more her feelings deepen, the more Logan increases his distance…

This is the second book of the series and I couldn't WAIT to get to reading it. It could stand alone decent, however, I would highly recommend that the first one be read first. The first book has more details and background and this book references the events of the last one a couple of times.

Now, in this one Tessa is bonded to the spirit Logan, who would rather spend all of eternity in the Void. Tessa wouldn't mind being alone either, but a part of her is happy to not be alone anymore. After some events and lots of fights, Tessa makes a deal with Logan: be her friend for a week and at the end she will agree to release him and tell Addy (the lady who gifted Logan to her) to break the bond. Logan agrees.

These two have a lot, and I mean A LOT, of baggage from their past they are trying to sort through. They both have done things that they regret and are weighing them done. Sad thing for Logan is that he can't remember everything about his past, so it makes it worse that a part of him won't let him remember.

Now....I did not like Logan. He was a total jerk-o throughout 95% of the book. Yes, yes, he had done something bad and now he is steeped in guilt. He keeps his distance from Tessa, because he fears he may hurt her. I get it, but he was SUCH A BOOTY! I wanted to kick him. Once he got over himself, I was able to like-ish him.

I loved the character, Tessa. She was a girl who really deserved to have an HEA. I felt so bad for her. But I loved how complex she was. I wanted more of her POV then Logan's. I wanted to know more about her.

This was a lot of fun and it was a quick read. I feel it was smaller than the first one? Not quite sure, but I'm glad it was shorter. Honestly, I feel it could have been smaller. There were a couple of spots were I had to skim, but the rest of 98% had me absolutely hooked! I hope there are more books to come! I want to learn more about Aedan (spell?) and I hope he gets a HEA; he sooooo lonely and he's so nice. Poor guy...ghost...spirit...ghostly spirit guy.

In the end, this was a fun continuation of the series! I didn't like it nearly as much as the first book, but that is prolly because of the 2% of lull and Logan. Yes, I do feel pity for Logan, but he was not very nice to...anyone. I liked the rest of the cast and I liked the story. Love this world! I can't wait for more by this author. I do highly recommend this book, but I do advise to read the first one. Out of five stars, I shall stamp this with....mmmmmmmmmm, ummmmmmmmmm..........4.

"Poor guy...ghost...spirit...ghostly spirit guy'
LOLOLOLOLOL!
You made me want to read the first part, thank you!

Ana, LOLLLLL! I'm glad you enjoyed me not knowing what to call him xD. It certainly is a fun read.