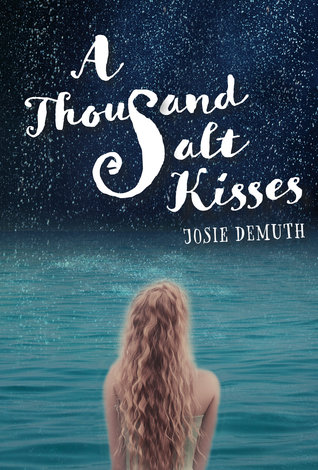 Author: Josie Demuth
Title: A Thousand Salt Kisses
Genre: YA, Fantasy, & Romance
Pages: ebook
First Published: April 2016
Where I Got It: My shelf (Given to me by the author/publisher for my honest and unbiased opinion)

Seventeen-year-old Crystal White is the new girl on Starfish Island. Dragged to the remote community by her environmental activist father, she is eager to find fun that doesn’t involve touching fish guts or listening to local folklore.

During a midnight swim with some new friends, Crystal is pulled out to sea by the waves. Convinced she’s going to drown, Crystal is rescued by Llyr, a handsome stranger. As she searches for him in the following weeks, she finds there may be more truth to the Starfish legends than she thought.

Over a sizzling roller-coaster summer, Llyr introduces Crystal to magic she’d only ever dreamed of. But as Crystal comes to love Starfish Island, it begins to drive her family apart. A nearby power plant is devastating local marine life, and her parents are stuck in the middle. As the magic and mundane parts of Crystal’s life converge, she finds herself risking everything to save Llyr, her family, and herself.

OOoh I certainly do have a love-hate relationship with YA books. I like them, because they are quick reads and they are fun. However, they leave me wanting more sometimes. I feel like this would have been WAY better if it wasn't a YA.

The romance was cute between Crystal and her mer-lover. However, it seemed like it was missing something. I can't really place my finger on what. It seemed so out-of-the-blue and I wasn't convinced that it wasn't a summer time fling.

Crystal was okay and so was Llyr, buuuut I didn't really feel the connection between the two. Maybe it'll be different in the sequel? Is there a sequel? I have no idea....but there needs to be or I'll rip my hair out. The ending was a SUPER DUPER cliff-hanger? What? Why? No! GAH!

I really want to understand more about the merfolk and their world. We got a tiny taste and some backstory, but it wasn't enough for me. I need more. Also, I want to learn more about George and his parents. I can't say much else, but I think it was crap about the whole George thing. Why? It's a total bummer and he got gypped for sure! Poor George. I want an HEA for him.

GAH! *shakes fist* I hated Crystal's mother. Her Dad was a cutie, but the mom was a total B. Her "apology" and etc seemed out-of-the-blue too and totally fake. >_> I have low faith in her and her not breaking the Dad's and Crystal's heart again. It bugged me they so quickly forgave her. I would be weary and still angry if I was either of them.

As I had mentioned earlier, this was a quick read. I wanted more out of the story and I really felt there was something missing. I'm not sure what. Also, a few situations and characters bugged me. I hope there is a sequel, because I do want to read on and maybe the void in the first book will be filled in the second. Also, I want George's story.

In the end, I stamp this with 3 stars.

Oh I know about a love hate relationship

*nods* I love them, but I hate them too somedays.

I usually avoid YA books nowadays but 3 stars seems to be a very generous verdict :). And a love-hate relationship is known to me as well.

Yes, I am weary on YAs, but I will read them once in a while.