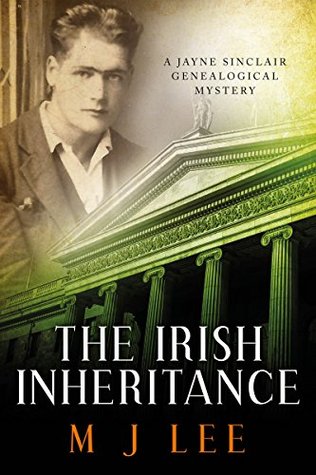 Author: MJ Lee
Title: The Irish Inheritance
Genre: Historical Fiction, Mystery, Romance, & Contemporary Set
Pages: ebook
First Published: June 15th 2016
Where I Got It: My shelf (Given to me by the author/publisher for my honest and unbiased opinion)

June 8, 1921. Ireland.
A British Officer is shot dead on a remote hillside south of Dublin.

November 22, 2015. United Kingdom.
Former police detective, Jayne Sinclair, now working as a genealogical investigator, receives a phone call from an adopted American billionaire asking her to discover the identity of his real father.
How are the two events linked?
Jayne Sinclair has only three clues to help her: a photocopied birth certificate, a stolen book and an old photograph. And it soon becomes apparent somebody else is on the trail of the mystery. A killer who will stop at nothing to prevent Jayne discovering the secret hidden in the past
The Irish Inheritance takes us through the Easter Rising of 1916 and the Irish War of Independence, combining a search for the truth of the past with all the tension of a modern-day thriller.
It is the first in a series of novels featuring Jayne Sinclair, genealogical detective.

My first thought when I finished the book………..wow. My second thought…………….Yayy! Should I elaborate more? Sighs…if I must.

This book was SO fun. It was certainly original and had me hooked since page one. I couldn’t get enough. The blend of history, mystery, drama, and action was perfect. The characters certainly made the story come to life.

It would be so cool to pay someone like Jayne to find uncover the mystery of who my mom's birth parents were. We know some small tidbits (more so the mom), so it would be neat. If I had money to spend like that I totally would track down someone to do that for me and my mom.

At first I was worried and scared. I wanted this to work, but I had a horrible feeling it would not be interesting. However, I was wrong…OH so wrong. Everything flowed well and even the research aspects had me curious. I really wanted to figure out who was poor John’s real father. I figured out who the real dad was pretty quickly, but the actual “how is that possible” was the real question. The how and the why were the real mysteries.

AND THAT TWIST AT THE END. HOLY COW! *applauds* It was good. I didn’t see it coming.

Ooooh that main baddie was a snot. I wanted to kick him.

I hated Paul, Jayne’s hubbie. He was a real big jerk. I mean…Jayne is not innocent in the fall of their marriage, but C’MON! It may be a silly job to him, but at least the chit is making money. For realz. Especially for this job. The client, John, is paying a crap ton of money for her to find his real Dad. My BF would push me and help me for that money. Haha.

My one and only compliant was the loose end. Why did the IRA try and kidnap her? Maybe I missed the connection….but I didn’t really understand the connection to the story and why was it important? Were they trying to help keep John’s real dad’s ID a secret? Will it be explained in the next book? Mhmmmmmm

WHEN IS THE NEXT BOOK COMING OUT?! I WANNA READ IT!!!! LOL

I shall stop my ramblings now…..

In the end, this was super fun and addicting. The characters and the story had me hooked. There was one loose end that is stumping me, but there really is nothing else to complain about. I do recommend this for those that like a blend of history, mystery, drama, and action. It is a good one. Out of five stars, I stamp this with 5.

It was pretty dang good. ;)