The Return of Legolas and other news.

It's confirmed...Orlando Bloom is officially on-board for 'The Hobbit' as the always graceful Legolas. I was worried that he wouldn't be there. Here's a little of the interview with Orlando Bloom:

"Question: You were a part of the hugely successful franchises for The Lord of the Rings and Pirates of the Caribbean, and now those franchises are continuing on. What’s it going to be like to see those movies, as an audience member?
ORLANDO BLOOM: Great! I’ve had such a great run with them.
Are you going to appear in The Hobbit?
BLOOM: Yeah, it’s looking like that. I’m really excited about going to see Pete [Jackson] again. It’s still a little up in the air, but the idea of working with Pete is fantastic. I can’t actually really talk too much about it, at this point. I just was given the script to piece through, so it’s quite exciting.
The whole script?
BLOOM: Yeah!
Will you have to do anything to physically prepare for that role again?
BLOOM: Are you telling me that I’ve put on weight, in the last 10 years? I just have to grow my hair really long and blonde again.
Isn’t he a younger version?
BLOOM: Yeah."
Also, Richard Armitage is 100% confirmed playing the role of Thorin and Sir Christopher Lee will be making an appearance as Saurmon! ^.^ To check out more, click HERE. 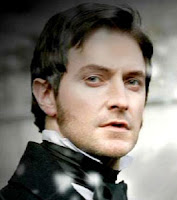 Email ThisBlogThis!Share to TwitterShare to FacebookShare to Pinterest
Labels: News, The Hobbit Movie

LOVED these movies!! I tried to read these books. Tried being the key word!