Book Review: The Knight of Maison-Rouge 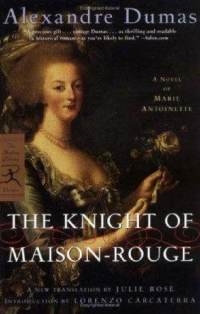 "Paris, 1793, the onset of the Terror. Brave Republican Maurice rescues a mysterious and beautiful woman from an angry mob and is unknowingly drawn into a secret Royalist plot - a plot revolving around the imprisoned Queen of France, Marie Antoinette, and her enigmatic and fearless champion, the Knight of Maison-Rouge. Full of surprising twists, breakneck adventure, conspiracies, sword-play, romance, and heroism, The Knight of Maison-Rouge is an exhilarating tale of selflessness, love, and honor under the shadow of the guillotine. Dumas here is at the very height of his powers, and with this first and only modern translation, readers can once again ride with the Knight of Maison-Rouge."

It was a nice ride. This book is like the ferris wheel at amusement parks. It's just a simple and relaxing ride. It's not the most popular ride, but everyone pretty much enjoys it. This is not Mr. Dumas' best book.

'The Knight of Maison-Rouge' is not a typical book I usually read. It heavily shows the Revolutionaries side and a little bit of Marie Antoinette's side. Too be honest, I wasn't a huge fan of this one. Yes, it did show a different viewpoint and it shows a very strong-willed and courageous Marie Antoinette. Which is different, because many novels about the Queen shows her as weak and how to succumbs to just playing the victim.

Alexandre Dumas is a fantastic author, but this was not his best. He does a wonderful job, but it was....not interesting. Like I said, the ferris wheel of his novels. Just a cute tale to take a break from all the breakneck rides that are so exciting you may lose your lunch. There were some twists and turns, but it was very predictable. The main character was kind of an idiot and very naive. I couldn't stand Maurice. The ending was horrid and made me mad. Besides that, it was not a horrible book. Just not a classic and I'll probably never read it again. Out of five *s, I grant this one 3 stars. It would be 2.5, but I don't give decimals, so I rounded up.